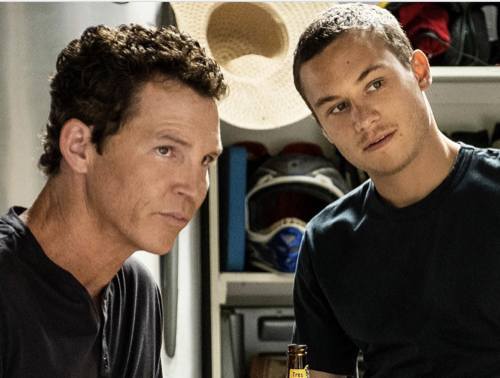 Tonight on TNT Animal Kingdom returns with an all-new Sunday, July 17, 2021 episode and we have your Animal Kingdom recap below. On tonight’s Animal Kingdom season 6 episode 7 called, “Incognito” as per the TNT synopsis, “Pope prepares to see an old friend. Craig needs Deran’s help when Nick’s in trouble. J pursues Penny romantically. Andrew wants to be called Pope.”

In tonight’s Animal Kingdom episode, Amy called up Pope. Pope hadn’t spoken to her in a while. They ran into each other accidentally after years of no contact and now they were talking again. Pope had really cared for her in the short time they were friends. He even confessed to her having killed someone. She cut off the contact after that, but she’s since mellowed on that decision. She’s now ready to resume their friendship and Pope didn’t want her to second guess that. He was desperate to have her back in his life. Pope was pursuing her when someone else reentered Craig’s life. His ex needed help. Renn needed help because some drug dealers she was ousted out of the game had gotten jealous. And they kidnapped her son.

The son she shares with Craig. Renn took Nick and left one day because she didn’t like Craig judging her parental decisions. But then she needed help to get their son back. She couldn’t go to the police because then she would have to explain she was a drug dealer and her son was taken in the hopes of getting her shipment. She doesn’t have much family or friends. The only person she could turn to in a time like this was Craig. Craig was having some issues with his brother Deran. They recently got into a physical altercation only Craig turned to Deran for help the moment he found out what happened to his son. He tried to get a hold of Pope as well.

Pope wasn’t answering his phone. Craig also didn’t want to use J for help. He, therefore, turned to Deran and Deran didn’t hesitate in getting him the guns he needed to track down baby Nick. Deran also went with him. He wasn’t going to let his brother face off against drug dealers alone. Pope meanwhile wasn’t answering his phone because he wanted to prepare for a date with Amy. But that too soon got derailed because the rouge detective approached him. She pretended to be Taylor’s mom. She asked him for help in locating Taylor because they supposedly got into an argument. And she told Pope how Taylor looks up to him.

Being a role model, Pope couldn’t turn her away without offering to help. It ran the risk of ruining his date with Amy and he did it anyway because he wanted to help a kid he thought was in trouble. Pope went with this woman. She searched his car while they were supposedly looking for her son. “Louise” tried everything she could to get dirt on Pope. She even listened in on his conversation with Amy. Amy had tried to back out of the date. She ended up changing her mind when she found out he was helping locate a kid and so Pope didn’t want to risk her changing her mind. And he ended up taking Louis back to her car.

Back in the 90s, the then Pope was dealing with being left out. Pope had just gotten the nickname. He was hanging out with Baz and his twin sister Julia. Not all the time, though. Something his mother made sure to mention and she planted the idea in his head that he was being left out. She only mentioned it because Baz was sleeping with Julia. He was too tired on the job they were doing. The young Smurf just wanted to upset those plans. She told Baz that he could run the job if he stayed awake long enough to do it properly. She planted ideas in Pope’s head. She was masterful in the way she drove a wedge between Baz and Julia.

Baz didn’t even realize she was doing it. But Julia noticed. Julia was always able to see right through her mother. She alone inherited Smurf’s smarts and she passed it on to J. Its why J ran the family business. He knew what he was doing. When he wasn’t pursuing a very married Penny, he was threatening people or shaking them down. J even continued to do so on a date with Penny. Penny was ignoring his calls and so he stopped by her place. He asked her to spend a day with him. He really likes her. He doesn’t care that she’s married. He also met her sister, Cindy. Cindy was a drug addict. J with all of his experience was able to spot that in an instant.

J’s mom Julia was an addict. She never got clean. She eventually overdosed. J never forgot it and so his story served as a cautionary story for Penny with her sister. Her sister was currently living with her. Penny thinks that her sister can get clean, but hearing about J’s history showed her that there might not be a happy ending in this.

Craig and Deran got Nick back and the situation brought them closer. Killing people together had helped bring them closer. And Renn as well as the baby stayed by Craig’s that night.

Pope’s date was ruined by “Louise” who interrupted them. It also made Pope suspicious of the woman. And that coupled with someone moving around his cereal, made Pope realize that the house had been compromised.