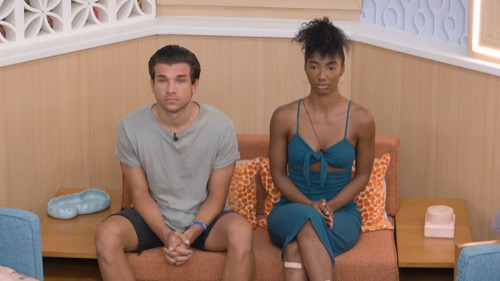 In tonight’s Big Brother episode, Jasmine was HOH. She nominated Taylor and Pooch to be on the block. She chose Taylor because Taylor had been sleeping in the bed next to her without saying a word to her. Taylor couldn’t bring herself to notice Jasmine until Jasmine won HOH. Taylor even thought that she was in a powerful position because she chose to be put on the chopping block. Jasmine had talked to her before the nomination. She told Taylor that she would be a pawn and that she really wants Pooch to go home. Jasmine also told Pooch the same exact same thing but in reverse. She told him he was the pawn. And that she really wanted to get rid of Taylor.

The truth is that Jasmine wants Pooch gone more than she wants Taylor gone. Pooch was the bigger threat in the game. He was friendly with so many in the house that sending him home now would be a major win. Taylor likes she’s as powerful as Pooch, but that wasn’t the truth. Taylor wasn’t going to win this one. Most of the house wanted her gone. The Girls Girls Alliance talked about it. They wanted to get rid of Pooch first and they decided that if he does manage to win veto – then they’ll just vote to oust Taylor. Taylor at the time was still thinking she was a safe pawn. She pretended to be upset at the nomination.

While behind closed doors, she went running around asking everyone’s temperature on Pooch. The Girls Girls Alliance swore to her that she was safe. They didn’t reveal they were in an alliance or that she would go home if Pooch survived. The guys on the other hand had formed their own alliance. One consisted of just guys. Some felt that was a stronger alliance than the joint one with the ladies because the guys were trying to eliminate as many of the women as possible. They wanted to save Pooch. They wanted to eliminate Taylor. They talked about it. They realized this alliance would be better if Taylor was gone. And so there were so many alliances at play over this one nomination.

There was also the veto challenge. Depending on who won, the nomination could change. Those who participated in the challenge were chosen at random and one of them was Michael. Michael was Taylor’s friend. Only he knew that most of the house wanted her gone. Michael talked about what his winning would mean for Taylor and he in fact lied to her. He promised her she would be safe when she wouldn’t be. Michael’s mind was set in stone. He was prepared to send whoever he needed to go home. Michael, technically, wasn’t in an alliance with Taylor. They were just house friends. Which could be fickle.

Daniel was chosen as the host of the competition. He was so fun with the last challenge that Jasmine figured he would be pretty great at this and she had been right. Danielle got to dress up as Poseidon. He also did voices as his time as the host. It was great. Danielle got the best view of the competition and so he announced it whenever a contestant got close to having that veto. The contestants were asked to wear a mermaid costume. They even got a crown. They had to take these giant pearls and using their head and crown they had to push these giant pearls in holes at the end of the field.

Michael quickly figured out a strategy. He used his face and he managed to get two out of the three pearls into the hole. He came close with a third when it missed the hole by mere inches. As he was trying to get the third one done, Taylor slowly started to get them done. The contestants needed to get three pearls in the hole. Taylor was slowly gaining on Michael when Michael was able to pull off a win. Michael won the veto challenge. He won and his alliances wanted him to keep the nominations as exactly as they are. Both Taylor and Pooch wanted Michael to use veto for them. Pooch’s best friend in the house had even told him to go talk to Michael directly.

Pooch hadn’t done that because he got cocky. He figured his Oasis Alliance would protect him. He said that Taylor was Enemy#1 in the house and that there was no way that anyone would vote him home. He told all of this to his best friend, Joseph. Those two have a strong bromance going. They also figured they had the women in their alliance wrapped around their finger. Something that Michael overheard and then told the women about. The women then wanted Pooch gone more than before. They talked to Daniel about it. They won over Daniel. They already had Michael. They just needed to convince the guys.

They knew that Joseph would never turn against Pooch. They therefore came up with the bright idea of having Michael use his veto power to get Taylor off the block and to nominate Joseph along with Pooch. Pooch is a threat now, but Joseph was a bigger threat in the future. Joseph was a guys’ guy. He would never turn against the other guys in favor of the women. The women knew they could work with him and so they wanted Michael to use his veto. Michael chose to save his veto. And that meant the nominations remain the same going into elimination.