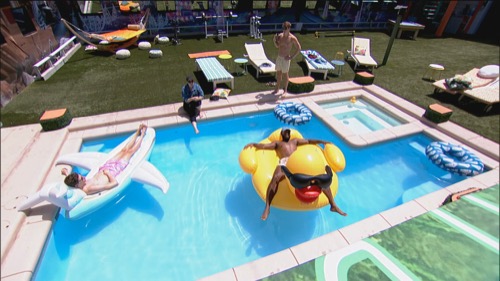 Tonight’s Big Brother episode begins with Taylor, three times and she is still in the house. Indy didn’t want Nicole to go home, she still thinks Taylor is a more significant threat and she is not happy about her choosing to be her festie bestie.

Daniel is in the DR room crying because Nicole went home. Daniel is a very emotional player, he goes to Alyssa and tries to make her feel bad about sending Nicole home. Daniel speaks to Monte and tells him that he is going to the final two, he is killing it. Daniel keeps ranting in front of the whole house and calls Monte a liar because he said he wanted Taylor to go home. Then he tells Kyle that he has zero class.

Monte gets upset at Daniel, he tells him to stop putting the spotlight on him just because he is upset that his ally went home. Daniel has no plans of being quiet, he says he has nothing to lose, and he knows he is going home next week. Meanwhile, Taylor is sitting on the steps, eating chips and enjoying the show.

Time for the HOH competition, it’s a dog park and it’s called BB Fest Poocha Poolaza where they have a chance to become man’s next best friend and become the next HOH. One at a time, they will take a walk across the dog park balance beams to get to the park benches on the other side. The course has different balance beams to choose from. If you lose your balance and fall off, you have to go back to the start and try again.

Jasmine barely makes a foot on the balancing beam, she should have sat out. Turner faceplants and Kyle comes in one second after Michael who wins the HOH. Monte is ecstatic that Michael won, the Leftovers are still in control and Daniel will probably get backdoored. Daniel wants a fighting chance in this game, he knows he may be put up for calling people out but decides a chat with Michael might help. Meanwhile, Michael and Brittany are in the HOH room, he doesn’t fully trust Daniel but is not sure if getting rid of him would be the best move for his game.

There is an incident in the backyard where Kyle passes by Jasmine, she claims that he hit her foot, but a replay shows that he didn’t, yet she is crying for ice. Turner says if a fly landed on Jasmine’s foot she would act as if she fell off Mount Kilimanjaro. When Kyle returns with the ice, even her voice is altered, like she is dying from the pain.

Jasmine puts two muffins in a baggie, saving themselves for another time. She finds one of them half eaten and goes around the house questioning people. She is driving Turner crazy, he says every extra day he is in the house she drives him nuts. Meanwhile, Turner at the muffin finds it hilarious. She is driving him so crazy that he would love for her to be up as a pawn, and maybe be sent home.

Monte tells Michael that he wants him and Joseph on the block so it won’t look like they are working together.

Daniel goes to Michael and grovels to stay in the house, he tells him that he will do any dirty work he wants. Michael says that the HG’s want to backdoor him this week. Michael thinks this may be an opportunity to pull him in and let him do the dirty work that he doesn’t want to.

Michael then speaks to Brittany, he is worried about Monte, he is strong and very strategic mentally. In BB timing is everything, they really need to think if it is time to make a big move.

Time for the nomination ceremony. Michael nominates Terrance, Joseph, and Monte. Terrance is surprised, he had no idea. Daniel is happy, after all the drama this week, he wasn’t nominated. But, he is fired up to play for Veto if he is chosen.