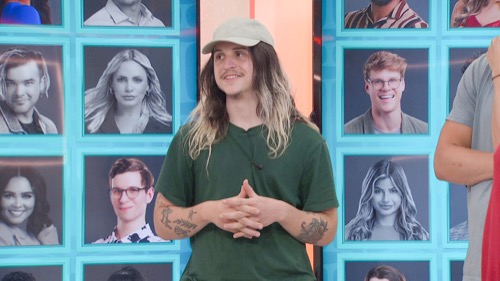 Tonight’s Big Brother episode begins with Turner not wanting to mention Michael’s name because he doesn’t want him to know that he is his true target. Meanwhile, Kyle feels grass, he thinks he is in a good spot in the game and is glad that Michael didn’t choose him for BroChella. Brittany goes to speak to Turner and she tells him that she didn’t have a final four with Joseph.

Taylor speaks to Turner and she is not convinced that Joseph threw her under the bus, it is not the Joseph that she knows. Turner then goes to speak to Michael and says he is sorry he put his friends on the block. Michael says it doesn’t hurt his game if either goes home. Turner wants to backdoor Michael but he doesn’t want him to suspect it. Michael is not stupid, he is playing nice, but he suspects that Turner wants to backdoor him.

The Afterparty brings Monte into their four, but not really, they just want him on their side but their loyalty is not to him.

Kyle tells Monte that he is the one that exposed the Leftovers, now Monte is nervous, what else can he pull? Monte then goes to speak to Taylor and tells him that Kyle manipulated everything.

Michael and Kyle are speaking, he says he doesn’t like Brittany on the block but what are his options? Kyle says the twist changed everything. Michael is suspicious of Kyle, he thinks there is a backdoor plan and Kyle is fueling it.

Time to pick players for the Veto competition, Michael has to get picked, otherwise, he knows he is going home.

Turner picks Alyssa, Taylor picks Monte, and Brittany pick Michael – Kyle doesn’t look happy. Whoever wins the Veto competition will get to watch an advanced screening of Bros and take three people with them.

Time for the Veto competition and it is the BB Rom-Com fest. Players have to fill a wine glass with rose from a tap, slide to the other side of the playing area and fill a rose receptacle. There is a smaller receptacle at the end of their lane and they can choose to fill that one first, if they do that they will get a large tumbler to transport the wine, instead of the wine glass. The lanes are slippery. The first player to fill the receptacle with a rose will win the Veto and the advanced screening. Michael knows he has to win this Veto with an active plan to get Kyle up there instead. Michael doesn’t think it is worth his time to fill the small receptacle, so moves on just to the large one. Turner thinks the other way, he fills the small one. Michael wins and couldn’t be happier, he just saved himself. Taylor is nervous, Michael will probably use the Veto on Brittany.

Michael invites Turner, Taylor and Alyssa for movie and snack time. They all loved the movie.

Michael decides that it is time to tell people what Kyle has been saying to them so he can keep all the BroChella HGs in the house.

Michael tells Monte and Taylor that Kyle was trying to plan an all-white alliance because he thought there was a Cookout 2-0 alliance brewing in the house. Although, he didn’t actually say “all-white,” but he was planning it that way. Taylor thinks it is a bummer that Kyle was afraid of people of color all banding together. Monte thinks it is sad and he doesn’t even have an option to work with that pound after hearing this.

Michael and then Brittany tell Alyssa and she is confused, she tells them that she would never want to be a part of that at all. In fact, she doesn’t know how to move forward with him.

Brittany enters the HOH room with Michael and Turner, she says she hated what Kyle wanted to do and it isn’t good for anyone’s game.

Kyle goes to speak to Alyssa, she tells hi, what is going on, that was trying to make an alliance a race thing. He says I is not true and this can not only ruin his game, but it could ruin his life.

Turner tells Michael that he needs to process the information, he has a lot to consider. Although Kyle is his friend and his final two, he has to think about this.

Kyle goes into the diary room and says he is concerned that HGs are using things that he said and twisting them.