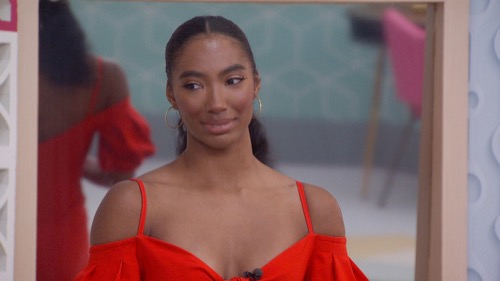 Tonight’s episode begins with the final four going to war to fight for their position in the house. Taylor is thrilled to have HOH, she feels so go, and she is guaranteed a place in the final three. Monte says they can officially say that the only ones left in the house are leftovers.

Brittany is devastated that she didn’t win, and her plan to get rid of Taylor is foiled.

Turner tells Monte that he cannot believe that Brittany flipped that vote. Monte says that she did and she wants to pin it on him. Turner is getting frustrated with Brittany, and he doesn’t think she is a toy tester either, he wants her gone.

Taylor goes in and hugs Brittany, she says she wondered if she could win HOH and she is thrilled that she did. Brittany feels a distance from Taylor, she loves her to death, but it just made sense last week for her to vote Taylor out because she could win comps against Alyssa. Taylor is just glad that she secured her own safety in the game.

Taylor says it is not about the money, she wants to make a game-changing move about being the first black woman to walk away with the money on finale night.

This week is all about the Veto, this will decide who is going to finale night with Taylor.

Monte knows the only way to guarantee that he is in the final three is if he wins the Veto himself.

Turner asks Brittany if they can chat a bit and she ignores him. She says she doesn’t think there really is anything to say. He says what she did, by trying to get him to vote out Taylor, is slimy. Turner says she is the most manipulative, and he needs to get the Veto. Turner goes to speak to Taylor and Monte, he tells them what he said, well he exaggerated. Then he starts crying because he voted out Alyssa. Taylor feels empathetic for Turner, but she is also paranoid and wonders if it is all an act.

It’s time for the nomination ceremony. As HOH Taylor has a responsibility to nominate two people for evictions. She chooses to nominate Brittany and Turner. She tells them that in the last eviction someone was lying to her, Monte had to break a split vote and this upcoming Veto has a lot of weight, they have the power to seal their fate.

Taylor wants Turner out, she knows Monte and Brittany will take her to the final two.

Time for the Veto competition, it is a math fest. On go they have to uncover one of the panels on the wall revealing a photo from an event this season. They have to grab numbers from the photo calendar and put them under the photo for which day they occurred. They must have all eight photos correct, then add up the numbers and put the total number on a plaque. The winner of this Veto gets to choose who goes to the final three.

Monte wins the Veto, Taylor is bumped but if someone had to win it other than her, she is happy it is Monte. Brittany can’t believe she was just one off, Monte holds her fate in his hands. She is hoping that she can get Taylor to see that she is better to take to the final three than Turner. Little does Brittany know, that Taylor wants to take her to the final two, so she can beat her.

Taylor and Monte go into the HOH room and start kissing, she jumps up on top of him and they hug. While she is all cozy with him, she says “you know Turner can beat us if we take him to the final 3.” She rubs his face and tells him she wants to keep Brittany.