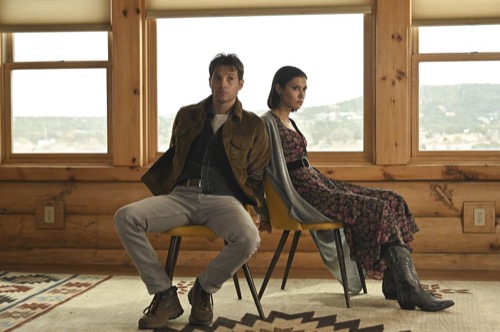 Tonight on ABC their new thriller by David E. Kelley, Big Sky airs with an all-new Thursday, May 12, 2022 episode and we have your Big Sky recap below. In tonight’s Big Sky season 2 episode 17 ‘Family Matters,’ as per the ABC synopsis, “A concerned Jenny searches for Travis while Scarlett, desperate to protect her daughter, Phoebe, makes an unexpected phone call that could change the course of more than one life.

Elsewhere, tensions rise at the Bhullar ranch when Jag finds out the truth about his father and Travis’ identity is revealed, leading Alicia to advise Veer it may be time to step down.”

Tonight’s Big Sky episode begins with Jenny going to the hospital to see Tubb when she finds him with a nurse who tells her she should leave. Jenny finds it strange when the nurse knows her name. Another nurse comes in and says she is not supposed to be in the room, when Jenny says she spoke to the other nurse, she finds out there is no other nurse on.

Jag was waiting for his dad all night to arrive back in town, he fell asleep. His father gets in the car, Jag tells him they know who cut the drugs and wants to know why he did it. He and ren think he should take a step back in running things. His father tells him to challenge him, he is a spoiled little brat. When they arrive at the house, they find Richard and he has a gun. Bhullar tries to go closer to him and Richard tells him to stop and not go further.

Jenny is really worried about Tubb, she tells Cassie about the nurse. Cassie says they need to find Richard before he hurts anyone else. Jenny says sooner or later he is going to show up on the Bhullar’s doorstep. Cassie and Jenny head there and find the front door ajar, inside a table is turned over. Stone and Ren are there, upstairs and tied up. Ren says the guy has her father and brother. Jenny goes to leave and Ren asks her if she is going to untie her and she says no, everytime she turns around another body drops.

Richard takes the two where his son’s life ended near the water and tells them that is where their life is going to end. They get out and Richard walks them to the spot where he found his son, he still has the gun pointed at them.

Ren tells Stone that now is the time to talk, he shares his and she shares hers. She knows that he is a cop and can see the vibes between him and Jenny. He asks her if she knows all that then why is he still breathing and she says that is the question.

Richard stops them, Jag says he is sorry and Richard tells him to get down on his knees, Bhullar too. Jag says that he is not a killer. Richard says he wasn’t before, but they turned him into one. Richard says this is for Mason. Bhullar tells Richard to kill Jag he is responsible for Mason’s death and he is in charge of everything. Bhullar gets up and walks way, Jag screams for him and Richard shoots Jag. Bhullar turns around and looks, then keeps walking.

Jenny and Cassie arrive and tell Richard to put the gun down, he does and falls to his knees. Jag has a pulse, they call an ambulance. Jenny hugs Richard and tells him everything is going to be ok.

Ren heads to the hospital to see his brother, he is in an ICU. Jenny tells her that there is no place for her there, maybe she should have let him die in the dirt. Ren tells her that she knows who Travis is, a cop. Jenny retaliates with hopefully nothing bad happens to her father, it’s a dangerous world out there.

At the office, Denise tells Cassie that she did a good job with Richard but she is worried about his family. Then they talk about Cassie’s dad and she says she misses him, and can’t believe Scarlet is out there with an innocent little girl. Cassie says she has been thinking about the grief counselling.

Scarlet is in a café, she picks up food and then runs out, and when she does she bumps into someone, the same guy who was the nurse in the hospital with Tubb. A police car is there and tells them to get out of the way, when they do, Scarlet makes her exit with Phoebe.

Tubb asks Jenny why she is there, she says Travis has disappeared and this is different, Ren told her that she knows he is a cop. He tells her to forget about Travis. Someone is bringing in someone to be acting sheriff while he is gone and she says she doesn’t need any help. She has a guard outside the door and tells him that she saw someone that shouldn’t be there earlier.

Alicia asks Veer what happened, he says that Jag stepped out of line and there are consequences. He says his children are not ready, and she tells him that he is not ready. He reminds her that she would be nothing without her. She tells him to walk away or fight it out with his children with his last breath, but either way, it is going to be a future that does not include her.

Scarlet stops at a roadside bathroom, Pheobe asks her where they are going to stay tonight and she says they will figure it out together. Someone locks on the door, twice. Scarlet shouts that there is someone in there. Humbert, the man at the café, asks her if he misses Ronald, because she is going to see him real soon. He gets his gun ready and knocks down the door. He says they know she made a copy of something that wasn’t hers, and she needs to tell him where it is or he will kill Phoebe too. He looks out the window and he thinks they took off, but the whole time they were behind the door hiding.

Cassie goes to her grief counselling meeting, she says the man who killed her dad isn’t gone and a part of her wants him to stay there.

Donno and Tanya are talking, he says he doesn’t know why Ren hasn’t asked him to kill Travis yet, Tanya says that maybe she has another plan.

Ren is with Jag, he says no more fights. Then he asks where dad is, she wants to know what happened out there.

Cassie gets a call from Scarlet who says she has information that she wants about the sex traficing. She wants to make a deal, a better life for her daughter. Cassie tells her to give Phoebe up, it is the only thing she can help her with. Scarlett says that she killed the love of her life.

Jenny finds Travis at ger place, he says it is goodbye. It’s about Kate Garza, he wants to see this through for her. He leaves.

Veer tells Ren that maybe it is time for him to step down, he is sorry for being hard on her. He says she is fierce and a lot like him, he always knew it would be her, he just had to see it for himself.

Scarlett and Phone are outside Cassie’s house.