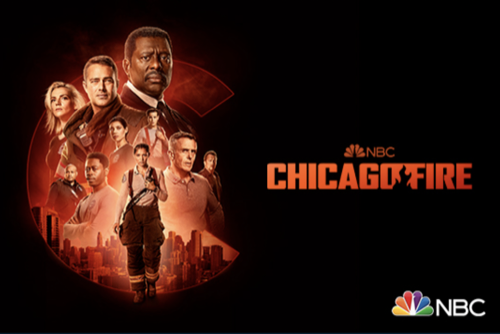 Tonight’s Chicago Fire season 10 episode 19 looks like it is going to be great and you won’t want to miss it.   While you’re waiting for our recap make sure to check out all our Chicago Fire recaps, news, spoilers & more, right here!

In tonight’s Chicago Fire episode Stella Kidd and Kelly Severide were finally married. They got married last season in a beautiful wedding that had all of their friends and family there. They then went on their honeymoon to a secluded cabin in the woods, but they were interrupted on their honeymoon by a couple of angry drug dealers that Severide managed to upset in the weeks leading up to his wedding. The dealers wanted revenge. Severide caught one of them in act of drug dealing . He was even testifying against the organization behind the dealers. And so the dealers wanted nothing more than to make an example out of Severide and his bride.

They wanted to prove that they couldn’t be crossed. But they were bad at the job. Severide heard them coming and he and Kidd snuck out into the back. They were pursued. They were shot at only Severide still got the better of them and the police later showed up. The dealers only knew how to find the couple because there was a mole inside of the police force. The mole was being spied upon. It’s how the police found out everything. They later went running to help the couple and were able to save the day. Severide naturally wanted to know the name of the mole. The police refused to tell him and so he still has questions.

Severide was still feeling a certain way about it all even as both he and his wife returned to work. The other firefighters made a joke about it because they were glad was everyone safe and it was funny that neither Severide nor Kidd could go a week on their own without returning to work. They were glad they were there. They got to hear what they knew. They got to ask questions. Plus, they needed all the hands they could get because Mason wasn’t there. Mason was gone for some reason. Kidd’s team was making do with a string of replacements that just weren’t cutting it. The latest guy always had a reason for why he couldn’t do something.

Gallo was the running putting gas in the fire engine when he spotted Chief Hawkins. Hawkins looked worse for wear. Gallo approached him and talked to him. He found out that Hawkins was being transferred. Hawkins went to bat for Violet back when Emma was around. He told his bosses about his relationship with Violet. How she was being blackmailed by Emma. How Violet deserved her job. But all the bosses heard was that he was having an inappropriate relationship with an underling. They were now going to transfer him to the Southside. He would be mere a few blocks away from Indiana.

Gallo felt bad for the guy. He also thought Violet would never have broken up with Hawkins if she knew the truth and so he told her. He was a good friend in that sense. Violet certainly appreciated it. She had been a little too quick to dump Hawkins. She felt at the time he hadn’t done enough to protect her job and it turns out he did everything he could do. It just wasn’t enough. They got lucky when Emma abandoned her partner in a fire before running away. Emma got fired. Violet got to keep her job. The only person it truly affected was Hawkins. Hawkins was transferred. And so there’s a reason he didn’t immediately answer his phone when Violet called.

Violet was shocked when her call went to voicemail. Hawkins usually answers it when he sees its her. He didn’t that time and that was enough to shake Violet. She then did more than call. She went to Hawkins’s apartment building. She waited around for him and the moment she saw him she barely exchanged words before she was kissing him again. The thing about their relationship was that she genuinely did love him. She still loves him. He loves her too. Its why he was prepared to risk everything to save her career. To make sure she was at a job she loves. Violet’s situation may have resolved itself, but that doesn’t take away all the hard work that Hawkins did.

The two were back together now. They talked about his job and Hawkins doesn’t want to put off his transfer. He’d much rather have an open relationship with Violet than be her boss. Violet was telling Brett about it when the call came in. The whole shift got called to a fire at wedding. Kidd even got a new guy joining her team that day. His name is Sam Carver. He and Kidd went to the academy together. Carver was very cocky back then. Kidd still thinks he’s a little cocky now and so she was hesitant to take him on. Boden ultimately pushed Carver on her. Carver had made name for himself for being legendary in the field. And so Kidd agreed to take him.

Kidd also said she was going to train him to be on her team. He hasn’t proven himself to Kidd just yet like Mouch or Gallo have and so those took priority in the wedding fire. They got people out of the tent. They unfortunately lost someone.

Severide also got help from a friend in naming the mole and he blown the guy’s cover. The guy can no longer be used in taking down drug dealers. And so Severide lost a friend because of this, but he’s fine with the decision he made.

Brett also ran into her ex-fiance and her conversation with him was enough for her to realize she needed to end things with Casey. Casey was miles away. He wouldn’t be moving back for another couple of years and so Brett needed to put herself first for a change. She ended things. And now she’s free to see what else is out there for her.