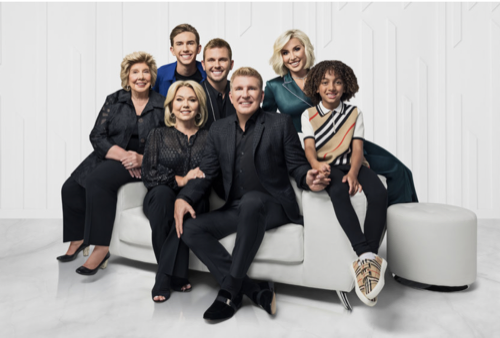 So make sure to bookmark this spot and come back between 9:30 PM – 10:00 PM ET for our Growing Up Chrisley recap. While you wait for our recap make sure to check out all our Chrisley Knows Best videos, pics, news & recaps, right here!

In tonight’s Chrisley Knows Best episode, Todd has found a neighborhood app that excites him. It was filled with tidbits. Mostly gossip. Savannah said those apps are usually just neighbors spying on each other and yet Todd loved it. He even reads about his mother’s neighborhood there. It turns out Faye’s neighbors thought she was a menace. They gossiped about her yelling at the garbage truck in only her robe and they even took a picture of her speeding in her golf cart. Faye denied it was her. She didn’t care that there was a photo. It didn’t matter that Chase was in the same photo because he was also denying it was him. They were being accused of bad driving and they said it didn’t sound like them.

When they weren’t pleading the fifth, Chase was still laughing about the prank of the century. He caught his father on video screaming like a girl at a fake snake and now he never wants Todd to forget it. The family was calling him the reigning prank master. Chase of course living it up. His video of his father went viral. Everyone has seen it. Including his father’s friends and family and so Todd vowed revenge. Todd wanted to prank Chase back. It couldn’t be a bad prank. It couldn’t be something less than Chase pranking him and that forced Todd to truly consider everything he was willing to do in order to humiliate his son.

Julie was staying out of it. She doesn’t get the prank war. She thought it would never end and so she was wisely choosing not to pick sides or else might get caught up in the prank. It was really Todd’s thing. Todd pranked everybody. He once pranked his mother with the assistance of a police officer. He pranked Chase before Chase pranked him. He actually poured freezing cold water on Chase from the balcony. It gave Todd such a laugh that that’s why Chase pranked him with the fake snake. Now, it was Todd’s turn again. Todd came up with this prank to scare Chase. He was going to go on a camping trip with his sons.

Todd was going to originally pretend he got attacked by a bear with his friend Jay’s help. Julie walked in on their strategy meeting and she asked why there was a shirt with fake blood on it. That’s when Todd told her the plan. She told him “no”. That he couldn’t do it. She didn’t want him traumatizing their son. She made Todd cancel the camping trip and that’s what he did. Todd didn’t realize that he was being a little too obvious with his “camping” trip. Chase figured out he was going to be pranked. He came up with his own prank to get back at his dad in advance and so Todd would have gotten a nasty surprise in the woods.

It would have involved a fake alligator. Not that Chase could use it once the trip had been canceled by Julie. Both Chase’s plan and his father’s plan were ruined by Julie. Julie did her best to stop the prank war, but it was hard to stop once in motion and both men still set out to prank each other. Chase also took some time to talk to Savannah and Grayson. Those two convinced their Nanny Faye to record videos of herself telling her family stories. It was supposed to be a nice tribute. Only they dressed up their grandmother. Put her in makeup. They also kept cutting into her storytelling by telling her she needed to keep things interesting.

Savannah and Grayson treated their grandmother like some social media star when she wasn’t. She was simply their Nanny Faye. She just wants to share some interesting stories with her grandchildren. She didn’t care about making a production out of it. Chase told his siblings as much. They realized they were putting too much pressure on their nanny and so they redid the videos. They let Faye just wear her normal clothes. They also gave her a pina colada. She relaxed and her stories got more interesting. She talked about beating some bullies up because they made fun of her little brother. She even demonstrated how she would beat them as well as talk about running away from the cops one time after she tried to sneak into the movies.

As for Chase, he told his mother not to intervene. He swore he could handle being pranked. Then Todd actually pranked him by putting live cockroaches in his noodles and Chase screamed like a girl. He firmly believes his father went too far by using live cockroaches while he only used a fake snake on him.