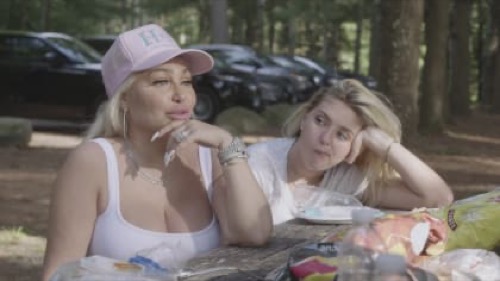 Tonight on TLC their new reality show Darcey & Stacey premieres with an all-new Monday, January 10, 2021 episode and we have your Darcey & Stacey recap below for you. On tonight’s Darcey & Stacey season 3 episode 1 called, “Moving On And Bossing Up,” as per the TLC synopsis, “Darcey and Stacey take a big risk to expand their company. Also, Darcey confronts her past, and Stacey puts family planning aside to focus on what makes her happy in life.”

Darcey and Stacey are back! The twin sisters used to look alike and now they don’t. They both went through some serious plastic surgery to the point they looked related, but they just don’t look like identical twins anymore. They were already pushing things as it is with their fillers and botox. The additional surgeries now has ruined their intent. They originally were intending on their surgeries making them both equally beautiful while the same and they lost out on the same end of their goal. Maybe if they hadn’t done their noses as well. The noses were too a little too thin as in didn’t look real or as if they could have been born with them.

But the sisters were happy with how they looked. They didn’t even mind their new breathing problems or how they have to “lightly” blow their nose now. They love their look. Their families were supportive of their surgeries and even their dad didn’t mind it. Michael was asked if he was hurt that his girls didn’t look like DeSilvas anymore and he said “no”. He just wants them to be happy. If they needed surgery to do that, he was going to support them. Michael on the other hand was never going to get surgery himself. He said he wants to stay the same way God made him and so he was fine in his own skin. And had nothing to prove.

His daughters however have started pursuing plastic surgery in a reaction to being bullied as kids. They now say their empowered women and so Mike pointed out that saying and living it are two different things. They have to feel empowered. Darcey in particular struggles with this. She has the unfortunate pattern of picking the wrong men and she doesn’t just date these guys. She married one. She became almost engaged to another and actual engaged to the most recent one. Georgi wasn’t a good guy. He had Darcey feeling like she was crazy for things he did. She finally ended their relationship last season and her family was happy for her.

Stacey was supportive of her sister. She just doesn’t know why her sister choses these guys. She wants Darcey to do the work to break this pattern and Darcey doesn’t seem to know how to do that. Like she said she was done with Georgi. Then why she did agree to meet up with him and having an impromptu picnic with him at the park. She should have known that meeting with him would give him ideas. He thought it was opening. He showed up with flowers and the picnic. Hence the impromptu picnic. He told her that he misses her. He mentioned how good she looks. He left out the part how he thought she looked better than before because that was saved for his confessional.

Georgi didn’t hid the part where he wants to get back together. Anyone with common sense would have realized that’s why he asked to meet and Darcey may tell her she only showed up to give him back the ring, but there’s literally a federal agency that could have shipped it for her. Darcey didn’t need to be there in person when he got the ring back. All it did was make her witness to when he started crying. Darcey then felt bad about him crying and she tried to cheer him up. She eventually slept with hi. It wasn’t the least shocking in the slightest. She claims she needed his help with her bags at the hotel and somehow that translated him in staying the night.

Georgi thought that meant there was a chance for them. He tried to convince her to fully taking him back the next morning and Darcey considered it. She said she sees how Georgi has been bettering himself. She sees that he’s doing the work to become a better man for her. She was still interested in him and so Darcey took him back. She thought they needed relationship counseling, but she had no problem with taking him back in spite of everything she complained about or told others she felt when she was with Georgi. No one wanted her back with Georgi. They all wanted her to move on and she just couldn’t do it.

Darcey’s real motive in meeting up with Georgi in the first place was always to take him back. She later told friends and family and no one liked the idea. Her friends even got so upset to the point that they stormed out of the house. They couldn’t see why Darcey would backpaddle. Darcey talks a big game about empowerment but her father was right and saying it and living it are two very different things.