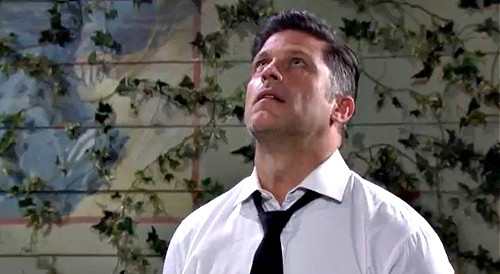 Days of Our Lives spoilers reveal that Eric Brady (Greg Vaughan) went to tell Nicole Walker (Arianne Zucker) how he felt. However, he was too late as Nicole had already married Rafe Hernandez (Galen Gering). During the week of July 11, Allie Horton (Lindsay Arnold) realizes “Ericole” still loves each other. Allie could take action to give the couple a happy ending.

Even though Eric admitted he is still in love with his ex-wife, he refused to break up Nicole and Rafe. Roman told Eric that Nicole wasn’t married yet, so it wasn’t too late yet.

Eric finally gave in and went to see Nicole at her apartment.

However, when Eric got there, Nicole announced that she married Rafe at the courthouse earlier that day.

Eric was clearly devastated and walked away to leave the newlyweds to celebrate their marriage.

Even though Nicole married Rafe, that is not the person she really wants to be with.

Ever since Eric came back to Salem, Nicole has been drawn to him. However, Nicole assumed that Eric didn’t have feelings for her.

Plus, Rafe kept pressuring Nicole. When Nicole mentioned that the proposal was very fast, Rafe accused her of having feelings for Eric.

So, Nicole said yes to prove that she was committed to Rafe. Then, when Nicole mentioned having lunch with Eric, Roman, and Kate Roberts (Lauren Koslow), Rafe got jealous.

When Rafe suggested they set a wedding date, Nicole said there was no rush.

That led to Rafe demanding to know if Nicole was reconsidering marrying him. So, Nicole felt pressured to marry Rafe, which led to the mistake of tying the knot immediately.

Days of Our Lives spoilers for the week of July 11 reveal that Allie will question Nicole about her feelings for Eric.

Nicole and Allie are extremely close, so she will have a hard time denying the truth.

When Allie learns that Nicole still loves Eric, it could change everything.

After all, Eric is Allie’s uncle, so she probably already knows that he wants his ex-wife back.

This could lead Allie to come up with a plan to fix Nicole’s marriage mistake.

Allie might encourage Eric and Nicole to tell each other how they feel. However, Eric isn’t going to ruin Nicole’s marriage.

As for Nicole, she will feel that her hands are tied as she has already married Rafe.

If “Ericole” won’t make a move, then Allie could turn to Rafe.

Even though Rafe got angry each time he suspected Nicole had feelings for Eric, Allie could reason with him. Allie could explain that Eric and Nicole belong together.

When Rafe realizes that he pressured Nicole instead of allowing her to take the time to be sure of her feelings, he just might let her go.

Once “Ericole” are back together, what does that mean for Rafe’s romantic future? Who should Rafe be paired with next?