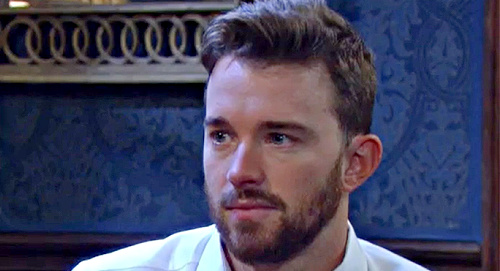 Of course, we should note that Chandler Massey is a recurring player and can’t be around all the time due to his day job.

Based on what he confirmed to SOD earlier this year, Massey lives in Atlanta and is a data visualization specialist at a healthcare analytics company.

That’s why Massey pops in and out for short stints instead of staying in Salem permanently with Sonny Kiriakis (Zach Tinker).

However, Days seems to be willing to work with Massey on his schedule since he only sought that job because they fired him! I

t’s understandable that Massey would seek stable employment rather than wait around for DOOL to call him up again.

In other words, Days wasn’t willing to make recurring status work for other performers, but it seems like Massey is a special case since it’s their fault he’s not always available.

It might be different if Sonny had a big storyline, but the show doesn’t seem to have major plans for him at this point.

That could change down the road, but we’ll see how things go following Will’s latest departure.

Since Will’s going to get a surprising Hollywood offer, maybe he’ll get another shot at writing the Sami Brady (Alison Sweeney) story.

After all, there’d be a juicy new film chapter now that Sami’s had another failed wedding and an ex-husband who kidnapped her while framing another ex-husband!

Regardless, Will’s about to head for Hollywood and will say goodbye to Sonny as well as Salem for now.

Many fans hoped that Will might get a chance to take Abigail DiMera’s (Marci Miller) place at The Salem Spectator, especially since Jennifer Deveraux (Cady McClain) has been talking about the tough task of finding her daughter’s replacement.

Will would’ve been a great fit due to his journalism background if he’d stuck around, but he’ll leave for Hollywood instead – though viewers will anxiously await his next comeback!

Days of Our Lives spoilers say Will’s going to pursue an exciting opportunity, so Sonny may offer his full support.

CDL’s the place to be for fantastic Days of Our Lives spoilers, news and updates, so stop by often.