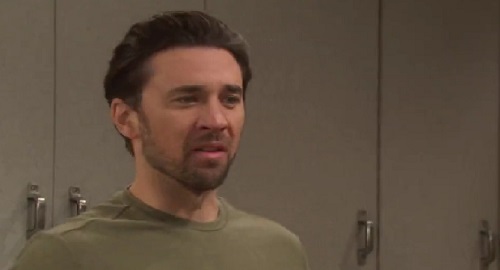 Days of Our Lives (DOOL) spoilers tease that EJ DiMera (Dan Feuerriegel) may stop Chad DiMera (Billy Flynn) from murdering Clyde Weston (James Read). It looks like it may be EJ who saves his brother from prison, so let’s discuss the DOOL drama ahead.

During the week of September 19-23, Sonny Kiriakis (Zach Tinker) will recall smelling vanilla just before he got stabbed. Days spoilers say Sonny will relay this odd hint to Chad and Will Horton (Chandler Massey), so they’ll try to put the puzzle pieces together.

Clyde Weston (James Read) will make an appearance at the hospital, which backs up the idea that he’s perhaps Abigail DiMera’s (Marci Miller) killer and Sonny’s attempted murderer.

Although Clyde may have some excuse for showing up there, it’s suspicious that he’ll be at Sonny’s location. Maybe Clyde will sniff around and try to find out how much Sonny remembers.

Jada will make a stunning discovery, so she may realize what they thought was Clyde’s solid alibi isn’t so solid after all. Rafe and Jada may determine that the footage was tampered with to tell a certain story.

Things are shaping up for Clyde to be revealed as Abigail’s killer – and that’ll put him in grave danger since Chad will be feeling so vengeful. Days spoilers say Chad will grab a gun and prepare to seek payback, so Clyde may get cornered somewhere.

Over with EJ, he’ll grow concerned about Chad doing something he can’t take back. EJ has made peace with his own ruthlessness, but he won’t want Chad to head down the same old sinister DiMera road.

There’s still hope for Chad if EJ can get to him before he makes a fatal mistake. EJ will recruit Belle Brady (Martha Madison) to help him frantically search for Chad, but it’ll be EJ who takes the lead in the end.

Days spoilers say EJ will come to Chad’s rescue during the week of September 26-30, so that could involve saving him from pulling the trigger and landing behind bars. The last thing Chad needs is to get sent to prison and face separation from his children, who need him more than ever with Abigail gone.

Then again, EJ could save Chad’s life if Clyde manages to gain the upper hand. Clyde may turn the tables and force EJ to turn them right back.

Will EJ try to kill Clyde instead or actually let the cops handle this? As other news becomes available, we’ll bring you updates.