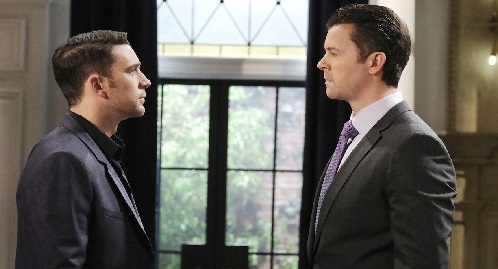 DOOL fans know Leo has been making his revenge list and checking it twice! Leo already knows who’s been naughty and is quite eager to make his enemies pay for their actions.

Chad already got a little taste of what Leo can do when that scandalous article came out. However, Leo is just getting started and will unleash plenty more mayhem as this storyline heats up.

Days spoilers say Leo also wants revenge on Abigail DiMera (Marci Miller), but that could lead to more trouble than anyone ever bargained for.

Nevertheless, let’s focus on EJ for a minute since he’s truly working on improving himself. EJ had to take a long look in the mirror since he was actually proud of Johnny DiMera’s (Carson Boatman) behavior while he was possessed.

It showed EJ that he was the kind of guy who approved of the devil’s attributes. That’s not the man EJ wants to be anymore, so he’s made peace with Chad and wants a fresh start as real brothers.

The problem is Chad’s keeping a huge secret that’s destined to explode. EJ still doesn’t know that Chad played a big role in setting him up and sending him to prison.

Chad had his chance to come clean and let it pass him by, so now this can only end badly. Days spoilers say EJ will get some clues and put them together eventually, so Chad is going down!

Although EJ thought Stefano DiMera (Joseph Mascolo) would like to see them joining forces, perhaps Stefano would like it even more if at least one son proved genuinely ruthless. EJ could let himself head back down a sinister path once he discovers Chad’s betrayal.

Between conniving EJ and scheming Leo, these two could become a powerful team. EJ might even target Abigail as well if she stands by Chad despite his betrayal.

Whatever the case, EJ’s going to be furious once Chad’s secret comes to light. That could put EJ in the prime position to go after his lying brother, so Abigail could at least get caught in the chaos.

Since we know Abigail will be murdered in the months ahead, could Chad’s secret betrayal kick off some sort of chain reaction? Could Leo and EJ land on the murder suspect list – even if they’re proven innocent in the end?