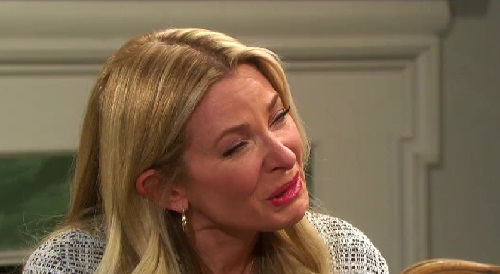 Days of Our Lives (DOOL) spoilers recap for Monday, September 5, reveals that disguised Leo Stark (Greg Rikaart) made a shocking Sonny Kiriakis (Zach Tinker) visit while Jennifer Deveraux (Cady McClain) once again had a painkiller problem. Here’s how all the Days drama went down.

At the Horton house on Monday’s DOOL episode, Maggie Kiriakis (Suzanne Rogers) talked to Jennifer about Sonny’s attack and wondered how she was coping after Abigail DiMera’s (Marci Miller) murder.

Although Jennifer put on a brave face, Maggie found a bottle of painkillers once it spilled out of Jenn’s purse. Jennifer ultimately confessed to refilling one of Doug Williams’ (Bill Hayes) prescriptions and nearly taking them.

After Jennifer admitted how hard things had been since she lost Laura Horton (Jaime Lyn Bauer) and then Abigail, Maggie suggested they attend a meeting together. Jennifer tossed the pills in the trash bin, but she later came back and secretly dug them out.

Meanwhile, Rafe Hernandez (Galen Gering) summoned Sloan Petersen (Jessica Serfaty) to the police station and filled her in on new evidence against Leo. Rafe demanded Sloan’s cooperation in finding Leo or else he would charge her as an accessory.

In Leo’s motel room, he dreamed Chad showed up and stabbed him for revenge. Leo then posed as Alex over the phone and learned from the hospital that Sonny was still alive.

Sloan eventually called Leo, who acted like there was nothing his attorney could do for him now. However, Sloan believed Leo had been framed and said she wanted to help him prove it, so he gave her the name of his motel along with his room number.

Since Rafe once again threatened to lock Sloan up, she agreed to provide Leo’s hideout info – but she insisted on tagging along since Leo deserved his lawyer. When Rafe barged in Leo’s room with Sloan later, they realized Leo had given them the slip.

At the hospital, Stephanie kept pushing Chad DiMera (Billy Flynn) to have breakfast and get some sleep, but Chad didn’t want to eat or rest until he knew Sonny was OK.

In Sonny’s ICU room, Justin Kiriakis (Wally Kurth) sang to his unconscious son following surgery. Will Horton (Chandler Massey) made it back to Salem and rushed to Sonny’s side as well.

Although Will battled guilt, Chad offered reassurance since Sonny wouldn’t have listened if his husband pushed him to back off Leo.

Afterward, Sonny was alone when Leo posed as a female nurse and entered his room. That brought a puzzling shocker for Sonny as he awoke and looked up to find Leo in disguise.

Once Stephanie was summoned to the Kiriakis mansion, she learned Alex would be overseeing her work on Titan’s PR crisis.