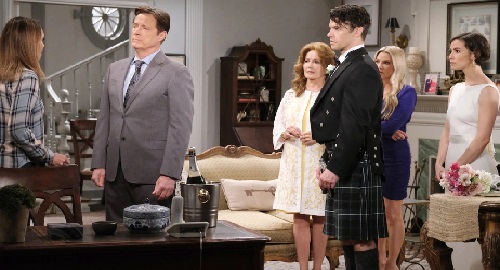 At the hospital on Tuesday’s Days episode, Sonny thought Leo was the one who stabbed him and assumed he was there to finish him off. Leo explained that he was being set up and argued that he never would’ve left his enemy list lying around as proof.

Sonny remembered the searing pain of being stabbed in the back, but he didn’t see the person’s face. However, Sonny covered for Leo when another nurse came in and eventually got on board with the idea that Leo was being framed.

Next on Tuesday’s DOOL show, Rafe wondered if Sloan had tipped Leo off somehow since the motel room he was staying in was now empty. Sloan denied it before Rafe figured out that Leo must’ve gone to the hospital.

That gave Sloan a chance to call Leo and warn him about Rafe’s imminent arrival, so Leo escaped on the elevator right as Rafe showed up.

Trask didn’t think Leo’s guilt meant that Gwen was innocent – and Chad remained suspicious of Gwen as well. Nevertheless, Gwen was adamant that she didn’t murder Abigail DiMera (Marci Miller) and offered a warning about Leo potentially going after Chad as his next target.

At the Horton house, Jennifer Deveraux (Cady McClain) got caught with the pill bottle, but she assured Jack Deveraux (Matthew Ashford) that Kayla Johnson (Mary Beth Evans) just prescribed something for headaches.

After Jenn downplayed it, she got updates on Jack hiring a lawyer for Gwen and his belief that she could indeed be innocent. Jennifer seemed upset over the news at first, but she ultimately understood Jack’s desire to look out for his remaining daughter.

Once Xander and Sarah decided to get married right away, they showed up hoping that Jack and Jennifer would be their witnesses. Although Sarah and Xander were prepared to wed at city hall, Jennifer and Jack insisted they should do it at the Horton house instead.

Maggie Kiriakis (Suzanne Rogers) officiated the small ceremony, which brought some heartfelt vows from Xander and Sarah. Since Gwen wanted to thank Jack, she arrived and eavesdropped on the festivities from the doorway.

Right as Xander kissed the bride, Gwen walked in and left her ex outraged. Fortunately, Gwen was a polite wedding crasher as she declared Xander and Sarah were meant to be.

Gwen also expressed her gratitude to Jack for the attorney he provided and assured Jennifer of her innocence. While Gwen returned to her motel room and cried over a photo of herself with Xander, Jack and Jennifer celebrated with Mr. and Mrs. Xander Cook.