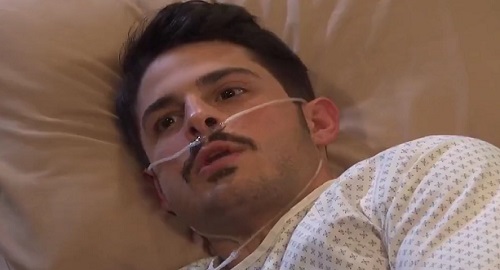 Days of Our Lives (DOOL) spoilers preview for the week of September 19-23 teases that Abigail DiMera’s (Marci Miller) killer will be revealed while Nicole Walker Hernandez (Arianne Zucker) and Eric Brady (Greg Vaughan) confess. Stefan DiMera’s (Brandon Barash) buried love will also become part of the story, so let’s talk about what’s ahead on Days.

For starters, Eric will start work as a new photographer at Basic Black. Nicole had to invent a job offer for Eric to cover up a lie she told Rafe Hernandez (Galen Gering) – and now Jada Hunter (Elia Cantu) has realized the deception.

Jada will probably mention it to Eric and cause him to question Nicole, who’ll admit she just didn’t want to tell Rafe about her steamy dream. Eric will find out Nicole made up that story about sloppy joes and the kitchen mess she supposedly woke up remembering.

This will be a pretty big confession since Eric also lied about his own sizzling dream. Once Nicole comes clean, Eric will admit they slept together in his dream, too.

Over with Gabi Hernandez-DiMera (Camila Banus), she’ll suspect that Stefan still loves her on some level. Gabi will raise that possibility to Stefan, who’ll no doubt shut it down.

Even so, Stefan’s love for Gabi is indeed still buried within. It’s just a matter of time until it shakes loose and makes Stefan realize Gabi is the only woman for him.

Of course, Gabi will have to suffer until then, so look for her to face Stefan and EJ DiMera’s (Dan Feuerriegel) attempt to dethrone her at DiMera Enterprises.

Other Days spoilers say Steve Johnson (Stephen Nichols) will threaten Orpheus (George DeHoyo) at the Salem PD. Although Steve will demand an antidote and become violent, Orpheus will remain calm and look forward to watching all his ex-hostages suffer agonizing deaths.

Sonny will tell Chad DiMera (Billy Flynn) and Will Horton (Chandler Massey) that he remembers smelling vanilla just before his attack. This clue will somehow spark Chad’s new theory and put him on the path to the truth.

We should mention a couple of significant moments in the promo – like when Clyde Weston (James Read) shows up at the hospital and runs into Alex Kiriakis (Robert Scott Wilson).

That’ll surely lead to a funny scene where Clyde suggests Alex looks familiar or something along those lines. Since Robert Scott Wilson used to play Clyde’s son, Ben Weston, Days won’t be able to resist a joke or two.

The important thing is that Clyde will pop up at the hospital. That alone may be a hint that Clyde is Abigail’s murderer and Sonny’s stabber. Clyde may be lurking right as Sonny helps Chad put the puzzle together.

Who killed Abigail? Time to find out!
Watch #DaysofourLives streaming on @peacock! A special $1.99 per month offer (for 12 months) is available now for a limited time. Terms apply. #Days pic.twitter.com/XvuP38ytGp