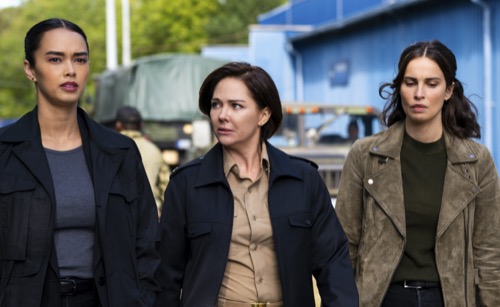 Tonight on CBS FBI: International airs with an all-new Tuesday, November 15, 2022 season 2 episode 6, “Call It Anarchy” and we have your FBI: International recap below. In tonight’s FBI season 2 episode 6 as per the CBS synopsis, “Vo’s friend from the U.S. Navy calls in a favor to help find her missing nephew in Crete. Meanwhile, Forrester hangs back in Budapest to take care of personal business.”

In tonight’s FBI International episode, a friend of Special Agent Cameron Vo reached out to her tonight. This friend needed her help. The friend’s name was Paige Taylor. Taylor had a nephew that was missing. They were both Americans. They were living in Crete because of Taylor’s work on the American base there and Kody was only living with his aunt because his parents couldn’t take care of him. His father was currently in rehab. The whole family has had problems with addiction. Taylor was the good one. She wanted to get Kody away from all of that and unfortunately, by bringing him to Greece she made it easier for him to jump from the frying pan directly into the fire.

Kody didn’t really make friends in Greece. There was also the fact that homeschooling didn’t work out. Taylor thought this archaeological program would help him fit in when he went to boarding school the next year. But the whole program was a hoax. It shut down three years ago. The web page that Kody showed her had actually been created four months ago and so it really was a hoax. The question is whether or not Kody knew about it. Kody was the one who brought up this program. He claimed he heard about it through social media. He also asked her to drop him off and that the program directors would come and get them later on.

Taylor never met anyone from this program. Or even the other kids that were allegedly attending. She simply saw the website and she chose to believe that Kody was finally making friends in Greece. She didn’t realize anything was wrong until he failed to answer during two checkup calls. It wasn’t until he missed the second one that Taylor went to the school, she saw it was closed and had been for years, and she realized her teenage nephew was missing in Greece. That is if he was still in Greece. She didn’t know where he was and so she turned to the local police. They said they couldn’t do anything because they ruled Kody as a runaway. She then turned to the American Embassy. And they told her about the local FBI unit.

Around then was when Taylor got in touch with Vo. She wanted her old friend’s help in tracking down her nephew and they found out something unpleasant while doing so. They found out Kody was involved with the Typhon Faction. They were an extremist group. They’ve even been labeled a terrorist group. Kody has actually been using a computer at the local library to get in touch with these people and it started off small. They asked him to come to protests. He did. He even started throwing stuff at local police. It then got worse and worse from there. The TF took Kody to an abandoned farmhouse. They jumped him into their terrorist organization.

By that, they beat him until he felt like one of them. Kody managed to send a distress signal to his aunt from his phone not long after this beatdown. The FBI and local police used that to track down the phone and they found a bloody farmhouse. They also found car tracks leading to the local village. They went there and that’s when they found Kody. Kody was beaten up. He was even branded. But he was alive. He also claimed that he ran away from the terrorists once he found out they were going to bomb a festival. He claims he jumped out of a moving vehicle and right away both Vo and Kellet knew he was lying.

They knew he was lying because there were no abrasions from the road on his arms or legs. He didn’t jump from a single thing. He left his friends out of his own volition and if he was lying about an escape then he might as well be lying about everything else. The FBI looked into the festival. They knew there was no terroristic attack planned against it. Making it at least two lies Kody has told them. The FBI finally had enough and they detained Kody. They asked him what really happened. They wanted to know what his friends were planning. Kody refused to talk. Vo then strapped him to a polygraph machine and was going to question him again when Kody cracked.

Kody revealed what really happened. He said he was only beaten up because the terrorists wanted access to an American military base and he couldn’t get in there unless he was injured. The terrorists hated that the Americans had made a deal with the government of Greece to enlarge their military presence there. The terrorists hated that. They thought Greece was selling out to the Americans and that’s why they approached Kody. They got to a friendless boy. They told him that he would be fighting the fight of the righteous by helping them and so they beat him up. They let him go. He sent the distress signal. And he had his aunt take him to the base to be treated for his wounds.

Taylor didn’t know that Kody carried a grenade onto the base. No one knew until Kody cracked and told them everything. The FBI alerted the base. Vo and Kellet even went there and they ran into gunfire from the TF. They couldn’t stop the bomb from going off. But they were able to contain it before it took out the whole base. Taylor later tried to lessen the charges against Kody and she went to Vo for help with that. And Vo didn’t help.

Kody was being deported back to the States where he’ll serve time in a juvenile facility. He wasn’t being tried as an adult and he was even being assigned someone to de-radicalize him. And still, Taylor ended her friendship with Vo because of it.

Special Agent Forrester hadn’t been with his team on this case. He stayed behind in Hungary and helped his young friend Zsolt’s father. He got the father free of the local mob and now Zsolt and his family can live freely. And so sometimes their job does come with perks.

Other times it ends long-standing friendships.