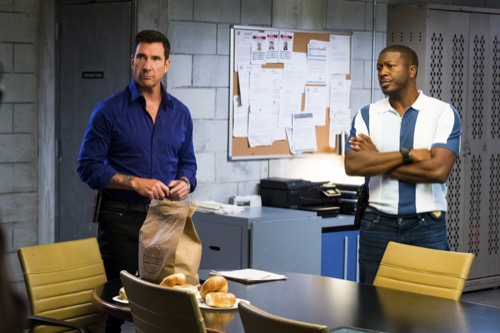 In tonight’s FBI Most Wanted, someone tossed a bomb inside of a local IRS office. Supervisory Special Agent Remy Scott and his team caught this case and it was a great way to test out their newest member. Special Agent Ray Cannon joins the team. He’s taking over from Ortiz. He was from New Orleans. He became a cop first while he went to night school to get his college degree and he recently graduated from Quantico at the top of his class. He was a great recruit. He has a lot of experience out on the street. He stood out to Scott and that won him a job on the team. But Cannon quickly showed how well he does when he spotted something weird with their new case.

The victim of the bombing had been an IRS officer. He does the auditing in his local office, but they were in the south and he was a Baptist and so why didn’t his family want to bury him? The family wanted to cremate what was left of the late Marion Meeks. Scott thought it was because they didn’t want an open casket. Cannon thought it was because the family had something to hide. Cannon looked into the family. Meeks’s son Jayden has priors. He committed a couple of assaults. Cannon thought the family might believe Meeks was killed in connection to something his son did. And the team knew better.

The team knew they weren’t checking for anyone that has a connection to Jayden Meeks. Jayden was black. They were looking for a white male who displayed agitation right before the crime and right after. The killer caught a taxi about a block from the explosion. The cab driver felt a little scared of him and so he let him out early. Which meant the killer was on foot. The team looked into anyone who had a grudge against Meeks and they found a suspect. Someone did threaten him. They tracked down the guy. He tried to run when he saw them and it all turned out to be nothing. The guy was fishing during the time of the murder. He could prove it. He took pictures with the fish.

He wasn’t their guy. Also, Meeks’s son had nothing to do with it. Cannon pursued his lead and it led to nowhere. Jayden was a DJ. He wanted to make it in the music business. He had access to his father’s gun and that was about it. Jayden was clean. Scott released him after talking to him. Something that irked Cannon. Cannon wanted to arrest Jayden for illegal drug possession. He had been caught smoking weed. Scott had to remind him they were in the manhunt business. They didn’t have time for the paperwork a parole violation would cause. They had to let the street busts go. Cannon wasn’t a cop anymore.

Cannon was also feeling testy around Barnes. Barnes came back from maternity leave and it wasn’t the same. LaCroix was gone. Scott had taken over. She needed to gain Scott’s trust and it’s hard to be on the outside while it’s looking like Cannon is on the inside. They had a little verbal spat in which Barnes accused Cannon of being overly sensitive. The truth was that it was Barnes being overly sensitive. She missed being in the inner circle. But the case was progressing. They found the killer’s hoodie and they were able to determine that their bomber wasn’t a man. She was a woman. She was also known to the victim.

The killer was identified as Darla Crais. She worked with Meeks before he was transferred to a different location. Darla hated Meeks. She also hated the other IRS officer she killed. She had worked with both men. They went to a conference together. They were drinking and she blacked out. Darla woke up the next morning sure she had been sexually assaulted. She told her boss. Her boss asked her to make a police report. But she couldn’t do that. Darla has DID. It’s Multiple Personalities Disorder. Darla didn’t want her bosses to know that she had the condition and so she recanted her story.

But then one of her personalities came out because she needed protection. Darla found out she was pregnant from the sexual assault. She had tried to get an abortion in another state. Those people denied her because she needed a police report proving it was a case of rape before she could be approved for an abortion. After Darla killed the second man involved in her rape, she went after the abortion doctor. She tried to force the woman into giving her an abortion. The woman refused. Partly because she was scared of Darla’s gun. Darla then grabbed an instrument herself and she self-aborted.

While she was down, the FBI was able to move in and get her the proper medical treatment. And Barnes finally talked one on one with Scott about where she stands in his new unit. She was the most senior agent on the team. Yet, she felt she wasn’t getting her proper due. And that’s what she demanded herself.