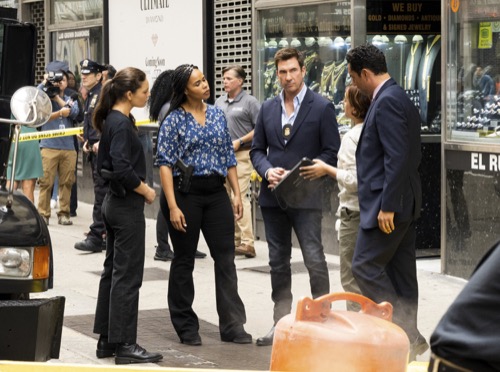 In tonight’s FBI Most Wanted episode, two men tried to rob a diamond transport team. The key word being tried. Joaquin Avila and his partner Chato Flores pulled their guns on the security team. The security team drew their guns. Everyone got shot. But Chato did run away with the diamonds he stole. He was the only one left standing and so he’ll be the only one faking time for this robbery homicide though funnily enough, the local robbery detectives had Chato. They arrested him for stealing a few months back. He didn’t have a record. He also was considered low-tiered in his organization. He was given a low bail and was back out on the street before anyone knew it.

This recent robbery wasn’t something normally up Chato’s alley. The New York cops thought he was trying to prove something and so that begged the question of who he was trying to prove it too. Supervisory Special Agent Scott and his fugitive apprehension team caught this case. They went to Chato’s house looking for evidence. They also looked into Chato’s fellow thief. Joaquin was fresh from Chile. He was what they considered to be a crime tourist. They come in, usually from South America, and do some smash and grabs before heading back to their country with an I Love NY t-shirt. It was all the rage down in Chile. It even had a connection to the cartels.

In fact, the cartel that Chato was in was connected to Special Agent Gaines’s past. Gaines went in undercover some years ago and unfortunately, her cover was blown. She was beaten, raped, and tortured. It was a miracle she was still alive after all of that. When her team rescued her, they also rescued the other women on the boat. It was one of those women that Gaines ran into at Chato’s apartment. The woman was skittish around authority. Gaines only got her to talk by showing her wounds from the boat. The ones that matched the girl’s wounds. They had both been victims of Oscar Zamora.

Zamora was a part of the FGN Cartel. It turns out that even after the girl was rescued from the boat like Gaines – she still fell right back into the cartel’s clutches. It’s how she hooked up with Chato. Chato was apparently pressured into getting the diamonds. His girlfriend didn’t know much. She just knew Oscar Zamora was involved. Gaines wanted to catch him. She wanted to bring him to justice, but there was a complication. Gaines had gone in undercover and she spent a lot of time around the Zamora family. It, therefore, wasn’t a coincidence that the leader of the family was murdered while being escorted to the FBI.

After the patriarch died, Gaines then got a call from the man’s daughter. Lucia. She said she was scared for her life. She thought her brother might try and kill her next because she stayed in contact with Gaines. Gaines agreed to meet her in a public place. Gaines’s team was surrounding the area and it was thanks to them that no one died. Someone from the cartel took a shot at both Gaines and the Zamora sister. Gaines’s team kept them safe. Gaines later put the sister up in a safe house with Chato’s girlfriend. Everything was going fine until the sister passed out. It turns out the sister was roofied.

But before she passed out, she had been on the phone with the brother she was supposedly afraid of. She had been giving him advice on how to make peace with their other brother, Manuel. She also kept talking about Christmas. There was an event that the family was labeling as Christmas. Whoever gets the present will be the one in charge of the cartel now that the patriarch was dead. Scott and his team reached out to the local DEA agents. They found out that Christmas was a large shipment of cocaine and fentanyl. It was worth millions. It could put whichever sibling on top as the new leader of the family.

It was imperative that this shipment be stopped. Scott and his team as well as the DEA found out where there was a meeting with both brothers and they went there. The meeting was on a boat. The federal agents fought their way on. They then arrested Manuel and Gaines went after Oscar. She found him alone in a hallway. They fought. Oscar almost killed her and so Gaines flipped the table by killing him instead. She had wrapped a wire around his throat. She applied pressure and waited until Oscar was no longer a danger to let go. She killed him. And no one was sorry about it.

But funny story, the sister couldn’t be trusted. Lucia played her brothers against each other and had even roofied herself when all along she was making a play at leadership. And it’s possible she murdered her own father.