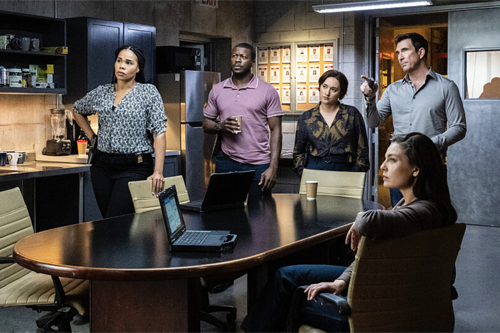 Meanwhile, an old friend from Remy’s past shakes up his relationship with April.”

Tonight’s episode begins with Lydia Washburn surviving having her throat slit as well digging herself out of a shallow grave. But sadly she did later succumb to her wounds and died at a hospital. She died before she could name names only the detectives didn’t need her to. They knew who killed her. The guy who killed her had dinner with her earlier that night and, while they didn’t get a photo of his face, they got a photo of the back of his neck. The tattoo said “56 rider”. It was connected to a guy who robbed the National Archives of several historical documents. And that’s why the FBI became involved because they were brought in to get those documents back.

The murder was just filler. So, the FBI did follow up with the National Archives to find out what was stolen. They were missing pamphlets that belonged to the Knights of the Golden Circle. They were a pro-confederacy group that believed in a backup plan if they lost the civil war. They were going to bring a bunch of gold to Cuba where they planned on restarting the pro-slavery movement. But the plan was never realized. Historians tend to think they just gave up. They thought these people felt so disheartened after the war that they gave up and canceled all of their plans, but that wouldn’t explain why someone in modern times would steal the pamphlets.

Hanna was able to find something about their killer/thief. She found out that the killer was a part of a white nationalist group and that’s where the tattoo comes from. She was even able to identify their perp. His name was Lennard Oxridge. Oxridge killed Lydia. He robbed the National Archives. But when they went to go question him, they found him bleeding out on the floor. He had been attacked. Remy pursued the attacker and he sadly lost him. Oxridge also was no help because he eventually died from his wounds. There were now two people murdered at this point and the team believed what it could be about.

Remy and his team looked into Oxridge’s connections. They found out he spent a lot of time with two brothers by the name of Tommy and Buck. It was the brothers who told them about the danger. They were searching for gold. Not just any gold. But lost gold. The confederacy couldn’t carry out their backup plan because they didn’t have the gold. The gold they were relying on went missing during transportation and now there’s a bunch of treasure hunters looking for it. They were even willing to kill for it. Lydia was killed because she finally pinpointed where the gold was. She was a professor before her death and she had access to equipment to help them look for the gold.

The brothers told the FBI everything they knew. They also took them to the cave where the gold was supposedly buried and they ran into someone else looking for the gold. A teenage girl. The girl claims she found the cave first and that she has first dibs. Remy informed her that’s not how this works. He talked to the girl’s guardians. Her grandparents. They said that they found the cave first and that they got the finder’s fee in their contract with the park ranger. But the park ranger doesn’t have the power to grant them a finder’s fee. He only told them to stall for as long as possible on permits that were never going to come.

Meanwhile, the park ranger also killed Lydia and Oxridge. Thereby crippling the Thorne brothers from getting to the gold and so the park ranger was behind all of this. His name was Toby. Toby has been spying on the investigation going on by the cave. He set up surveillance cameras as well as booby traps. Toby has proven he’s willing to kill, but the FBI learned that day that he was also willing to kidnap a teenage girl and hold onto her. Sadie had been warned to stay away from that cave. The FBI got warned to stay as well. The US. The Treasury department had commandeered the site. And they’ll be claiming all the gold.

But the gold wasn’t going to be in that cave. Sadie the teenager has been moving gold out of that cave for weeks and Toby saw that on his security cameras. He knew Sadie had the gold. It’s why he kidnapped her. He was beating her up for information when the FBI intervened. They stopped Toby from killing Sadie. The new guy on the team took a sniper shot at Toby and killed him. And Sadie got to keep her secret.

Sadie did find the gold, but Remy wasn’t going to tell the treasury agents that.