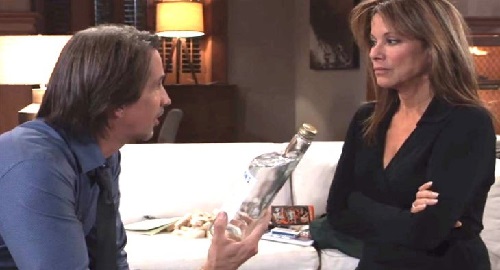 The show has a golden opportunity here since Gregory and Alexis have been growing closer lately. Although there was some initial conflict, Alexis found herself drawn to Gregory and now considers him a friend.

Of course, it seems like more than friendly feelings are developing on both sides, so Gregory and Alexis have been building to a romance. Meanwhile, Finn’s latest romance may be ruined.

After Elizabeth Baldwin (Rebecca Herbst) came clean about the Reiko Finn (Mele Ihara) situation and told Finn how sorry she saw, he admitted he was sorry, too. Finn touched Liz’s face tenderly like he was trying to savor one last moment with her and left.

It’s possible Finn will want to work things out later, but he doesn’t seem to see a path forward right now. Besides, Liz is entering a new story with Nikolas Cassadine (Marcus Coloma), so that’ll likely bring a romantic reunion.

That could leave the door open for Finn to enter a new story as well, so that brings us to that golden opportunity we mentioned. Decades ago, Finn slept with Gregory’s fiancée just before his dad’s wedding.

GH fans will recall that Finn and Jackie Templeton (Kim Delaney) kept that shocker a secret for many years. Finn even thought he was Harrison Chase’s (Josh Swickard) bio dad at one point, so that father-son love triangle created a big mess.

Now GH writers have the chance to create another one, so let’s talk about that. During the week of November 14-18, Finn will lean on Alexis for support. We’ll see Alexis offer guidance and perhaps stop Finn from surrendering to old impulses as an addict.

The show toyed with pairing Finn and Alexis romantically once upon a time, so why not bring that back around? It’d be a great time for it to happen since Gregory might end up feeling the same sense of betrayal.

Can you imagine if Finn sleeps with Alexis and potentially steals his father’s love interest? That’s just the kind of soapy drama that would make sense considering Finn and Gregory’s history!