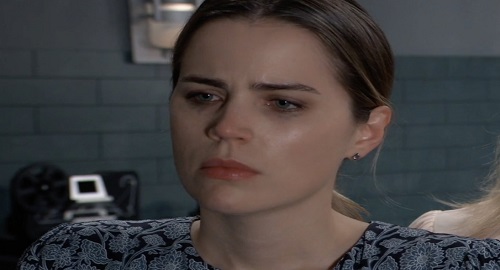 At Deception, Maxie helped Brook Lynn Quartermaine (Amanda Setton) come up with a carefully worded press release that included a $1 million donation to mental health organizations. It was designed to hopefully make the public more sympathetic to Sasha’s struggles.

Once Brook Lynn left, Lucy admitted they might have to make some tough choices and hinted about Sasha stepping aside as their spokesperson.

Lucy suggested a sabbatical and acknowledged that Sasha was their friend, but business was business. Livid Maxie suggested Lucy would have to deliver the news if she moved forward with this.

Elsewhere, Alexis Davis (Nancy Lee Grahn) met with Gregory Chase (Gregory Harrison) about their wager and determined that the readers agreed with his op-ed by a slim margin. There was also talk about Sasha’s attack and Gregory’s belief that Alexis should report on it.

Alexis recapped all the horrible things Sasha had been through and felt that not giving that context wouldn’t offer a complete picture of what happened. Gregory ultimately understood why Alexis was being cautious, so she was surprised they actually found common ground for once.

At the Metro Court pool, Dante Falconeri (Dominic Zamprogna) found Harrison Chase (Josh Swickard) in the water on a float. Chase learned his chances of getting his badge back were slim, but Dante didn’t want him to lose hope.

After talk turned to how Chase would make money now, Linc Brown (Dan Buran) appeared to point out he had other options.

Dante stepped away, so Linc gushed about booking Chase a gig at The Savoy and shared all his other grand plans. Chase acted like Brook Lynn had some irons in the fire too, but Linc clearly thought she wasn’t at his level.

When Brook Lynn appeared, she ranted about Chase not being a piece of meat! Chase was a beautiful artist in Brook Lynn’s eyes.

Linc kept going on and on about what he could offer Chase, including his plan to give him instant revenue. Brook Lynn argued that if Chase stuck with her, they could collaborate on songwriting and get him a bigger profit.

Once Brook Lynn walked off, she ran into Dante and got praise for her performance. Dante insisted he knew a con when he saw one.

Back with Linc, he also told Chase not to play a player. Linc felt confident that he knew what Brook Lynn was doing.

At the Metro Court Gardens, Damian Spinelli (Bradford Anderson) was distracted as Sam McCall (Kelly Monaco) sought help with a case. Sam called Spinelli out since he was so focused on Britt Westbourne’s (Kelly Thiebaud) interaction with Cody Bell (Josh Kelly).

Spinelli argued that Cody was a scoundrel of ill repute, but Sam thought he was a good guy – and so did Maxie when she appeared. Since Maxie was late for her brunch with Britt, she acted like she’d done her a favor since Britt was chatting with Cody.

Britt decided to get blunt and admit she didn’t like Cody. However, Cody suggested Britt had impossibly high standards and didn’t give people a chance.

Britt conceded that Cody was right and let him give her the fake passport gift he made for her. Although Britt was suspicious of Cody carrying this around, he claimed Maxie told him that she’d be there for brunch.

After Britt agreed to another date, she gave Maxie updates and left her delighted. Sam also grilled Cody about the reason for Spinelli’s disdain for him, but Cody acted clueless.

Back with Britt, she faced Spinelli’s warning as he urged her not to go on any more dates with Cody.

At the police station, Sasha remained out of it as Martin Grey (Michael E. Knight) encouraged her to drink some coffee. Gladys Corbin (Bonnie Burroughs) also arrived with an outfit and tried to make Sasha look presentable for court.

Sasha privately admitted to Gladys that Grant Smoltz (David Lautman) deserved what he got and that she’d do it again.

After Sasha ranted about Sienna Colby (Cynthia Zitter) turning on her, she said she was so tired of being exploited. Gladys gently wondered if Sasha was tired of feeling out of control as well and wanted to look out for her as family.

Meanwhile, Martin spoke to Brando about Sasha’s meltdown going viral and how this was just the latest in a long string of incidents. After running down the list of Sasha’s potential charges, Martin included attempted murder as one.

Although Martin hoped some charges could be dropped, others were unavoidable. Sasha needed to show she was committed to intensive therapy and restitution in hopes of cutting a plea deal, but Brando worried she wasn’t ready to face this.

Brando was desperate to keep Sasha out of prison, so Martin suggested a guardianship. That seemed extreme to Brando, who pointed out that Sasha already thought he was controlling.

However, Martin argued that it was simply a strategy to keep Sasha home and out of the slammer. Brando learned Sasha’s guardian would do things like make sure she went to appointments and monitor her finances.

The alternative was a trial – and given Sasha’s state of mind, Martin didn’t think that would go well for her. Brando was still on the fence as Sasha appeared with Gladys, who figured they were talking about her legal strategy.

Before Sasha was led to her arraignment, Brando offered some reassuring promises.