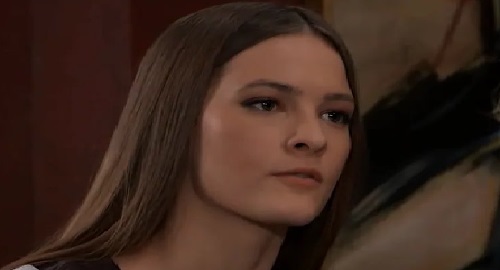 At GH, Heather Webber (Alley Mills) will be placed in a straitjacket and wheeled out – presumably to head back to the asylum. However, Heather will give Hamilton Finn (Michael Easton) one last chance to speak his mind before she goes.

Meanwhile, Elizabeth will return from Monterey and grow terrified about what she has to tell Finn. How can Liz even begin to explain all the Reiko Finn (Mele Ihara) revelations she uncovered?

Terry Randolph (Cassandra James) will give Liz a pep talk and hopefully provide some courage when she needs it most. It won’t be long until Liz lets Finn know they need to talk about his dead wife, so a shocking conversation is brewing.

In the meantime, Nikolas Cassadine (Marcus Coloma) will catch Esme trying to open the sealed French doors in the north tower. Nik will assume Esme wanted to crack one open and shout for help, so Esme will admit that’s true.

However, Nikolas will assure Esme that his staff are paid handsomely to look the other way in situations like this. Even if Esme could alert one of them to trouble, it wouldn’t do any good.

Nikolas will also rant about “The Hook” attacks and once again accuse Esme, but she’ll maintain her innocence. Since there haven’t been any murders or attempted murders since Nik locked Esme up, he’ll be skeptical of her claims.

At some point, it looks like Victor Cassadine (Charles Shaughnessy) will show up and sense that Nikolas wants him out of there ASAP. Will Victor investigate and discover pregnant Esme is a hostage?

Time will tell, but Victor will indeed hit the jackpot somehow. Victor would have some great blackmail material if he found Esme, who could become a new partner in crime.

Nevertheless, we can’t forget about Victor’s forced arrangement with Holly Sutton (Emma Samms), which could also bring a victory. Holly’s going to seek new Anna Devane (Finola Hughes) info from Robert Scorpio (Tristan Rogers), so Victoria may approve of what he learns.

Speaking of Anna, she’ll be relieved when Valentin Cassadine (James Patrick Stuart) makes it back to Port Charles in one piece. Valentin will credit Anna with saving him by sending Laura Collins (Genie Francis), who helped him get Charlotte Cassadine (Amelie McLain) back home, too.

GH spoilers say Valentin will have a plan to get Anna out of this mess, but he’ll have to hurry since she’s set to be transferred to Pentonville soon.

Over with Nina Reeves (Cynthia Watros), she’ll hint to Sonny Corinthos (Maurice Benard) about backing off if need be.

Nina may argue that she wants to give Sonny the time and space he needs with his family – especially with Michael Corinthos (Chad Duell) since Sonny is holding out hope for repairing their bond.

Of course, Sonny won’t let anyone stand in the way of his romance with Nina, but she may be more worried about Michael’s romance with Willow. It looks like Nina will confess her cheating suspicions regarding Willow and TJ, so Sonny will listen up.

At the hospital, Willow will prepare for her latest test results, but it seems she’ll seek TJ’s support beforehand. TJ and Willow aren’t having an affair, but they are keeping a huge secret together since he knows about her leukemia while Michael remains in the dark.