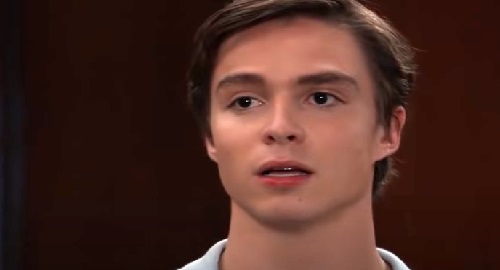 So far, Spencer has managed to stay in Victor’s good graces for the most part. Although Spencer has made mistakes, Victor appreciates his loyalty.

Nikolas, on the other hand, has become the problematic Cassadine lately. Victor has resorted to blackmailing Nik with the confession letter to keep him in line.

Since Victor doesn’t want Nikolas and Ava Jerome Cassadine’s (Maura West) marriage to last, it’s his way or the highway! This could potentially serve as a valuable lesson for Spencer down the road.

Victor has the final say on any love interests for the Cassadine clan. Since Trina certainly won’t condone whatever grand-scale destructive plan Victor has been hinting at, that’s surely going to be an issue.

Furthermore, Victor may be pulling the strings in all this hook chaos – or he could at least be connected to it. If Victor is doing anything to hurt the people Trina loves, there’s going to be trouble!

The quickest way to get Spencer to turn against Victor is to harm Trina or those closest to her. If Spencer finds out Victor is responsible for any of Trina’s pain or that he wants to keep them apart, it could lead to disaster.

Once Spencer is out of prison, he may find some good reasons to betray Victor for the sake of his own future with Trina. Spencer hates Nikolas at the moment, but teaming up with him might be the only way to defeat Victor – and the only path to true love!

It’s just tough to imagine Spencer and Trina having a long-term relationship with the threat of Victor hanging over them. Rory Cabrera (Michael Blake Kruse) may not be a problem for much longer, but Victor could be a real obstacle.

Spencer may ultimately resolve to take Victor down and join forces with Nikolas as part of that plan. We’ll bring you updates as other GH news becomes available.