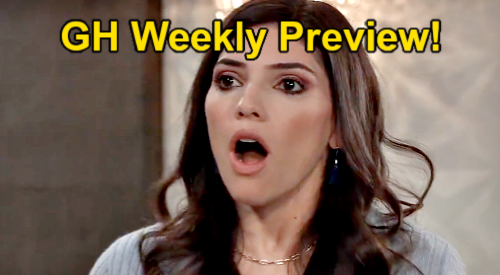 GH spoilers reveal that soaps are full of drama but also have romance according to the weekly preview.

During the week of March 21, Curtis Ashford (Donnell Turner) and Portia Robinson (Brook Kerr) sit together and smile at each other.

Everything appears to be going perfectly for the couple. They are moving into a place together and their relationship is all roses.

Of course, that means things are about to blow up.

It is teased that these two are back on but there is still the stalker mystery to solve.

Also, Cameron Webber (William Lipton) and Josslyn Jacks (Eden McCoy) share a smooch, but will it be their last one?

The video scandal doesn’t appear to be going away and in fact, things could get much worse despite Damien Spinelli’s (Bradford Anderson) hard work.

During the week of March 21, expect Alexis to get a pitch for a bombshell story.

Of course, the story is about Cameron and Josslyn’s scandal. Carly asks Alexis not to run the story.

However, it is teased that Alexis will feel torn over what to do. In the weekly preview, Alexis tells Carly that it “would be a mistake.”

It sounds as if Alexis is trying to persuade Carly not to do something.

Knowing Carly, she has a plan on how to take care of the situation, but could it backfire?

General Hospital spoilers reveal that the weekly preview teases many people in Port Charles will be shocked.

Brad Cooper (Parry Shen) looks stressed, which might have to do with Selina Wu’s (Lydia Look) big plans for him.

Laura Collins (Genie Francis) is seen with her eyes as wide as saucers.

Meanwhile, Spencer is glaring at someone as if he’s ready to tear them apart.

Of course, the person he’s shooting daggers at has to be Esme Prince (Avery Kristen Pohl).

General Hospital Spoilers for the Week of March 21

Willow is found lying on the floor in the hospital. However, she is still unconscious.

Could this be more serious than just a panic attack or fainting? Plus, Sonny tries to help Michael Corinthos (Chad Duell).

However, Michael rejects it, which causes Sonny to completely lose control and explode.

Be sure to catch up on everything happening with GH right now. Come back often for General Hospital spoilers, news, and updates.

“What do you want from me?!?” #GH pic.twitter.com/oVsYmSEyXL