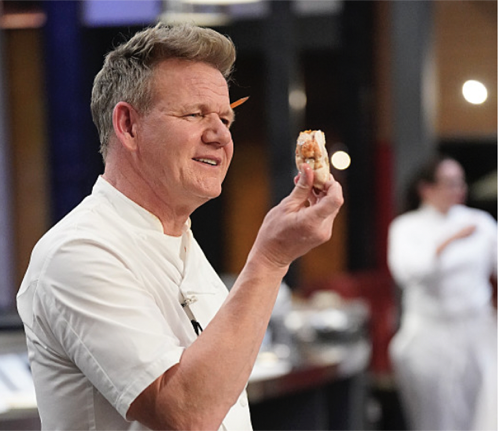 Tonight on FOX their Gordon Ramsay culinary competition series Hell’s Kitchen airs with an all-new Thursday, October 13, 2022, season 21 episode 3 and we have your Hell’s Kitchen recap below. On tonight’s Hell’s Kitchen season 21 episode 3 episode called, “Clawing Your Way to the Top,” as per the FOX synopsis, “The most-decorated skater of all time, Tony Hawk, and 13-year-old Olympic medalist Sky Brown join Gordon to teach the contestants a lesson on hard work and success. Then, each team has 10 minutes to shell and cook a lobster after watching Gordon demonstrate it to perfection.”

Tonight’s episode begins with Nicole who is getting tired of Billy being so loud. Tara as well is tired of Billy and wishes he would just shut up. The next morning, Billy is up and talking a lot again, but this time over at the red team and they can see why he gets on people’s nerves.

Christina and Jason walk in and bring helmets, knee pads, and elbow pads, tell the teams to go outside where Tony Hawke, the most decorated skateboarder of all time, along with Sky Brown, the Olympic medalist, are skateboarding on a ramp. Chef Gordon asks for volunteers who would like to go skateboarding first, Mindy and Vlad both offer to go first. Chef Gordon was just joking, but he is really impressed that they would both offer to do it.

In their next challenge, they will have to show consistency and attention to detail when they break apart a lobster. O’Shay calls Chef Gordon a ninja with that lobster.

Each chef will have ten minutes to extract the meat from a lobster and cook it.

Time for dinner service. Hell’s kitchen is the hottest ticket, booked months in advance. Tony Hark is in the dining room. Billy is making everyone’s heads spin on the blue team. Billy is talking too much and chef Gordon puts him in his place. The red team is already falling back, Ileana blames Sommer. Chef Gordon calls the red team in the back and tells them nobody is leading. He tells them to have a meeting and figure it out quickly. It really is Ileana and Sommer who are ruining it for the team. A meat-heavy ticket has the blue team sweating. Nicole is upset because her team keeps telling her how to cook. The blue team has raw chicken and wellington overcooked. Nicole brought up a raw chicken and blames her team for all yelling at her. On the red team, the fish station is like two high school girls who can’t get along with each other. On the blue team, Chef Gordon is losing it when thanks to Nicole and O’Shay raw lamp and raw NY strip are served up. Chef Gordon kicks out the blue team and tells them that they should be ashamed of each other and need to cut out the fat quickly.

The red team completed the dinner service. Meanwhile, the blue team is all sitting at a table talking. Abe says they have to speak about what they are going to do. O’Shay says he shouldn’t be nominated because Billy messed out two nights.

Time for the blue team to stand in front of Chef Gordon. Tara says the first nominee is O’Shay, he was lost. The second nominee is Nicole, raw meat, lack of confidence, and lack of communication. Chef Gordon tells O’Shay to take off his jacket and says he didn’t see any form of fight back and that is why he is leaving Hells Kitchen. Nicole is told to get back in line. Chef Gordon tells the blue team he is done with the crap.

Chef Gordon calls the two teams back downstairs, next dinner service all the women will be in the red kitchen and all the men in the blue kitchen.