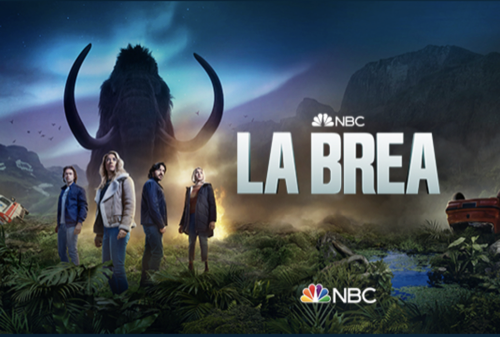 Tonight on NBC their sci-fi drama La Brea airs with an all-new Tuesday, September 27, 2022, episode and we have your La Brea recap below. In tonight’s La Brea season 2 episode 1, “The Next Day”  as per the FOX synopsis, “Desperate to reunite with her son, Eve follows a lead that brings her face-to-face with a ruthless prehistoric group.

Gavin, Izzy, and Ella question whether they’re fit to survive in 10,000 BC. Josh and Riley wake up at an unfamiliar time.”

La Brea season 2 episode 1 air from 9 PM – 10 PM ET on NBC. Make sure to bookmark this spot and come back for our La Brea recap! While you wait for the recap make sure to check out all our television recaps, news, spoilers & more!

In tonight’s La Brea episode, at Hollywood Lake Park it is a beautiful day, a little girl goes for a walk with her dog when he takes off on her and she loses control of the leash. All of a sudden, the earth is shaking, the Hollywood sign is tumbling and her parents run toward her to save her. Everyone is yelling and running. The sign lands on the ground, but the little girl, Carly is ok, and her dog is too.

Literally, where the Hollywood sign was, there is a large hole.

Eve is washing her face, Ty asks her about Silas but she says he won’t talk. She asks if there is any word on Marybeth and Lucas and he says no, nobody has been able to find them. She says at least when Josh was there she had someone. He tells her that she has faced so much adversity and gone through it, and they will get through this. She doesn’t seem convinced.

Sam and Levi are trying to work to get Josh and Riley back. They are questioning Silas and Levi reminds him that they have to be humane. Sam wants to find a way home and he is not doing that without his daughter. Ty walks up and says he is afraid that they are going to run out of time. Parra and her people let them question Silas but they are expecting him back and are going to be there soon. Silas caused a lot of people to die and they want him accountable for that. Eve asks Ty to get an extension from Paris. Sam says Silas is not going anywhere until he talks.

Elsewhere, Gavin has a stick with a sharpened edge and he kills a baby rhino, only for its mother to come after him. Luckily, he falls down a hill and the mother walks away.

Josh and Riley went into a light, they land in another place and think they are in the 50s, but it is 1988. They see Isaiah getting into a car and she wants to rush to him but Josh stops her. She asks him how are they going to get back to their parents, she thinks they are stuck there.

Silas tries to get away, but Sam has a gun on him, he tells Sam that Rebecca Aldridge can help bring his daughter back and can get him to her, but it is a day’s journey. He says a building, is made of glass and steel, but there are dangers there that they won’t be prepared for. Their only chance to save their children is to find Rebecca. Ty thinks Silas is lying, this is his plan of escape. Sam volunteers to stay with Silas, and Eve and Levi are going to find Rebecca.

Izzy is walking and she slips, and breaks her prosthetic. Gavin asks up and says they are ready to go.

Ty tells Sam it feels like they are friends for years. Ty is worried about him. Parra is back with her people, they’ve brought food. Ty thanks her. He tells her it is a great day. He tells her they still need Silas, Sam is determined to keep him until he gets his daughter back. He promises to deliver Silas to her himself. She trusts him.
Then they see Lucas, he is beside a gravesite.

Gavin thinks the wooly rhino is following them, that they are being hunted.

Eve and Levi go down to the grave, Lucas says mom got stabbed, and they tried to make it to the light but she lost too much blood. He had to dig the whole deep enough so the animals wouldn’t get to her. They hear screaming, someone shouting, “let me go.”

They get down on their knees and they see Veronica, people are dragging her and they have machetes.

Josh tells Riley that there is a bright side to the ’80s, there are no saber-tooths. They see a house and approach, calling out hello but nobody is there. One of the doors is unlocked, and they go inside and start to eat some food. He tells her to be quick, they need to grab as much as they can and get out of there. Someone calls and leaves a message, they discover the homeowners are gone for the weekend.

Rebecca is still screeching, she is getting kicked in the stomach. Lucas runs towards her, Eve tells him to stop, there are too many of them that have her. Lucas jumps over a log in front of them and says he is not losing anyone else.

Rebecca sees Lucas, she asks for water to distract the guy who is keeping guard beside her. Lucas jumps the guy, and all of a sudden, Eva and Levi are there as well. They rescue Rebecca, but there is a guy after them. Levi tells her to go, he promises to catch up. Levi has a gun, he tells the guy to go and nobody will get hurt. Meanwhile, Eve ran and now she is caught.

Josh and Riley are enjoying their stay in the house. She tells him that she doesn’t want to pretend that everything is ok.

Riley finds a newspaper, she sees on the front page in 1988 that there was a sinkhole at the Hollywood sign and believes they may have just found their way back to 10,000bc.

Luca and Rebecca are together, Levi shows up and Eve is nowhere to be found. That is because Eve is captured and they have her in a cage.

Scott and Rebecca have arrived, she pushes a button, inside a rock, which opens up an entrance to the building. He asks her if it is going to be super terrifying and she says probably, they both go down the stairs.

Lucas and Rebecca arrive back a the clearing, Lucas says Eve was taken. Levi stayed behind to rescue her. Levi gives himself up, he is locked in the cage with Eve and he tells her that he is not leaving her.

Gavin walks up to the Hollywood sign, they are in LA.

Josh and Riley are on foot again.