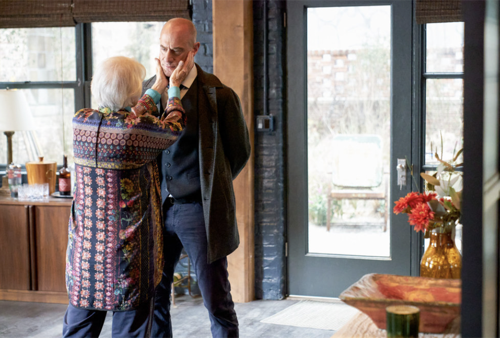 In tonight’s Law & Order Organized Crime episode, Governor Garcia held a press conference asking for the public assistance in the capture of McClane. Garcia’s wife was one of McClane’s victims and she’s now dead. It was her death that convinced Garcia into entering public life. Garcia is a great governor. He’s progressive on all the right issues and McClane didn’t mind that the governor spoke about him like he was an animal. He didn’t want to help Wheatley take down the Governor or get his revenge on a pesky detective.

McClane was grateful for the help in breaking out of prison, but he still sees himself as a good guy and he wasn’t going to help Wheatley. He said as much. He told Wheatley that he’d had to settle things with one person and that was it.

Wheatley had him dumped in a bad neighborhood. McClane made his way from there to one his safe boxes and he had nothing to do with what happened next. His followers started to gather on the dark web. They amped each other. They talk themselves into becoming hacktivists and committing crimes in McClane’s name. They hacked banks. They hacked cyber security cameras.

They were doxing politicians. It got so bad that the Garcia reached out to Wheatley personally for help. The poor guy didn’t realize he was playing into Wheatley or that Wheatley had orchestrated everything. And so he handed over his cell to Wheatley to protect it from being hacked.

Garcia trusted Wheatley to the extent that he had him by his side as he checked in with Bell’s team. Sergeant Bell and her team were using all their resources to find McClane. They didn’t have time to waste it on anyone’s paranoia and that’s why they thought Stabler’s suspicions were.

Stabler said Wheatley was behind this. He was the only one who could see it. He even dare to say it to the governor. Garcia got so upset that he hung on them. Stabler was told to focus on McClane and he chose to instead follow Wheatley. He followed Wheatley from the governor’s office to a waiting car. And there’s no telling where he went from there.

Stabler later returned to the office. He and the others continued to look for McClane when McClane decided to contact them. He wanted to give money to a woman by the name of Kesha Jones. She was the daughter of Luthor Jones. He’s a janitor that died after McClane hacked the federal reserve and closed a vault with in the poor janitor still inside. He died. McClane feels guilty. He wants to give the man’s family the money he was hiding. He said he wanted this to be done and then and only then will he give himself up. McClane managed to get them the money. He asked them to turn it over to Kesha and they didn’t do it.

McClane saw they didn’t do it. He therefore decided to do the work himself. He visited Jones’s widow. He told her that he put money into cryptocurrency and that it was for Kesha. She was set for life. She didn’t have to worry about paying for college. It was all taken care of. McClane went there knowing he’ll be caught. He told the widow what he had to say and he handed over the money. He left to see the FBI waiting outside for him. He agreed to come quietly and unfortunately he couldn’t do the noble thing because Wheatley’s involvement. Wheatley had someone pretend to be the FBI and this person pretended to arrest McClane when in fact he held him hostage.

McClane didn’t want to go to back to Wheatley. One of Wheatley’s thugs drugged him and took him to the boss. By time the FBI realized none of them of them had him, it was too late. They went looking for McClane and it was too late. He’s gone. Wheatley in the meantime was working on the governor. He talked to the governor about Stabler. He said Stabler hasn’t been of the right mind since he lost his wife and that he’s stealing grieving. He managed to talk Garcia into his way of thinking. He said he wasn’t the villain. He was just Stabler’s white whale. Wheatley had his ex-wife Angela deal with McClane.

Angela gave McClane a whole speech about how there’s still good he could do as a hacktivist. She also gave him her car and so when the police later showed up because they knew McClane went to her apartment – Angela dropped the fake limp as well as the frail act. She said that she didn’t want a part of Wheatley and McClane’s game. She also said that McClane stole her car. Which was again a lie and this time no one was falling for it. Stabler and Bell put out a BOLO for the car. They followed it to an abandoned warehouse where they where both Wheatley and McClane made their escape via helicopter.

And so Stabler knew Wheatley was involved, he just couldn’t prove it.