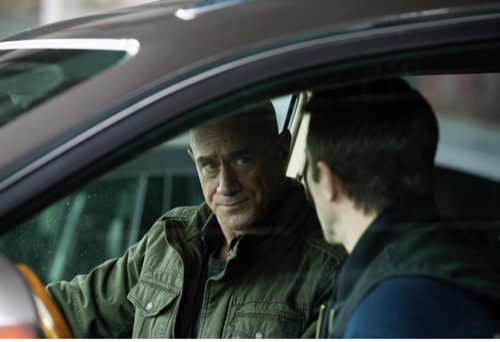 IN tonight’s Law & Order Organized Crime episode, Elliot meets with a psychiatrist and shares how he feels like he is betraying his own even though they are doing wrong. He feels like his late father would be upset. He was a cop.

A lawyer named Bonnie picks up a prostitute named Angelica from the police station. The two are gunned down when they arrive at Angelica’s home. Later, the team is updated on their murders. Bonnie was a civil rights lawyer and Angelica was involved in sex trafficking. Bonnie was trying to help her. Meanwhile, Elliot begins his new gig as cop in a new precinct. The captain is not thrilled to me him and makes it known.

Elliot heads out on patrol with his new partner for the night. Meanwhile, the team tries to track down who killed Angelica and Bonnie. They believe it could be a gang, the Marcy Killers.

Elliot and his partner bust two men in possession. They manage to get information on where there is more. They arrive at a building in the night. The operation has quickly shut down. They do manage to find more than 40 guns but are paid a visit by a gunmen. Elliot’s partner gets shot in the stomach.

Elliot meets with his partner in the hospital. His partner makes arrangements to get rid of the guns they found the other night. He tells Elliot to meet up with a police officer by the name of Van Allen. Elliot lets the team know. Meanwhile, the team catches a lead in their case. They bring in a man who let Angelica into his car. He tells them he didn’t kill her. They messed around. He thens mentions a cop named Van Aller who might know more.

They call Elliot to warn him. They then pick up another man involved, a gang banger named Hugo who they find hiding inside a mattress at his aunt’s home. He admits he knew Bonnie. He helped her with a peace treaty of sorts the year prior. They ask him why he called Bonnie the night before. He wanted to warn her. His gun was used however in the ladies’ killings. Hugo breaks down and tells them a cop named Van Aller took his gun sometime ago. He is being set up.

Elliot makes a stop with Van Aller. Before he goes into a store, Van Allen confesses he killed the woman because Bonnie was snooping around. She was going to out the brotherhood. When he returns to the car, the cop is dead after being shot in the head.

Elliott meets with his partner who thinks its best Van Aller is gone. He didn’t have the backbone to be one of them. He then tells Elliot a story he heard about Elliot’s dad. He too did some covering up when his partner shot a kid. Elliot doesn’t take this well but doesn’t say anything.