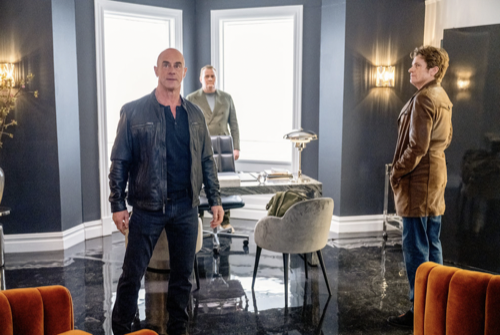 The task force takes an opportunity to nail down both Webb and the Brotherhood but runs into a dangerous obstacle. Bell must face the toll her job is taking on her marriage.”

In tonight’s Law & Order Organized Crime episode, Bell is forced to tell her wife she needs to pick another law firm. Bell confesses she is investigating Kilbride, the head of the firm. After, Bell meets with her team. They have their eyes on a big time money launderer by the name of Rutger. Bell thinks its dangerous but Elliot thinks they need to do this.

Elliot meets up with Frank for a beer. They talk about Frank’s new baby. Elliot then tells him Webb reached out to him about a job. Frank is annoyed Webb would go to Elliot. Elliot tells him that doesn’t matter. This is about money. They spilt everything on top. Frank says yes.

Elliot grabs some money from Webb for the job. He and Frank take it to Rutger. Bell and the team watch from afar. Rutger isn’t accepting at first until they promise a good deal of business with Webb. He finally agrees. They scope out his house and leave. Later, Frank and Elliot meet with their men. They plan to go back and rob Rutger.

Frank and Elliot arrive at Rutger’s home. Bell sits it a van unseen outside. Inside, Elliot and the team get to cracking the safe. Just then, Rutger’s security guard arrives home. They hide. He leaves and they then consider working on the safe. They finally crack it and find $700.00. They are shocked and angry.

Elliot and Bell meet after. They don’t understand what happened. He couldn’t have washed it that fast. Jet finds street surveillance with a van of interest.

Carmen comes to see Derrick. She knows he bought a gun and wants to know where it is and what hiss plans are. He reminds Carmen about the man who killed their dad. Carmen begs him not to do anything stupid. She will deal with this the right way. He hears her. But tells her he doesn’t have the gun. He changed his mind and never actually bought it, he tells her. She hugs him.

Bell and Jet learn the van is connected to a felon named Raymond. They track him down. He runs from them. They corner him on a rooftop. He shoots at them. Jet takes him down with a shot. They end up visiting him at the hospital. He wont talk. After some research, they see he rented a van with Elliot’s credit card.

Elliot heads to tell Frank who is scared he will be taken down. Elliot meets with Webb who thinks Elliot might be lying.

Malachi visits Jet with food and beer. He wants to check on her after the rooftop shooting. They kiss after he tells her he is her for her.

Bell arrives home to find her wife getting ready to meet someone from Kilbride’s firm. She is taking the job.

Elliot visits with a friend of his dad’s. He asks him about his dad and a shooting Frank told him was staged. His dad’s partner gets angry. That wasn’t staged at all. Elliot’s dad was a good cop. After, Elliot looks over some of his dad’s files. He finds a gun in there. The gun his dad taught him how to shoot when he was young.