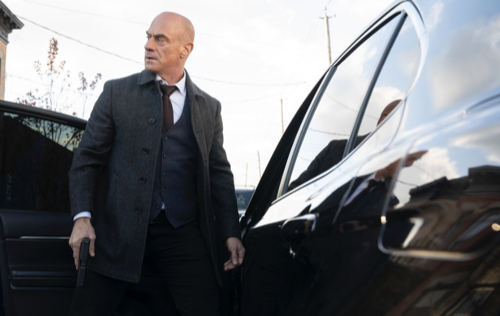 In tonight’s Law & Order Organized Crime, a prison break. The Organized Unit led by Sergeant Ayanna Bell has seen a lot and dealt with even more, but a prison break was a first for them and they were tasked with hunting down and capturing one out of five escaped convicts. The man they were looking for is Sebastian McClane. He’s a notorious hacker. He once hacked the federal student loans department and wiped away millions of dollars in debt for hundreds of people. He did this for his sister. McClane was once a soldier. He several honorably and he was given a honorable discharge at the end of his career there. He went on to join the CIA. He was working as an analysis when he heard about his sister’s situation.

It seems the sister’s debt from medical school was wiped away in a genuine computer error. She was told that she had to pay the massive debt from the very beginning and that includes parts she already paid and so she killed herself after facing a depression that came about because of this error. McClane’s parents had co-signed the loan. They were still on the hook for it. He therefore hacked a federal department and wiped away millions in an effort to save his parents. He became notorious after that. He was even celebrated in hacker communities and he would have gotten away if the police hadn’t figured out it was him. They put him in prison.

McClane was facing thirty years behind bars. He couldn’t deal with it and so he began a relationship with a female guard. She thought it was love. It was more opportunity for him. They started sleeping together and eventually he asked to use her phone to check in with his sick mother. His mother has been dead for seven years. He used her phone to contact an old friend of his. One that supposedly betrayed him by ratting on him to the FBI when it turns out they are still friends. His friend was questioned by Bell and Detective Stabler. He denied any knowledge of the prison break and claimed not to know where McClane.

The authorities didn’t believe him. They followed the guy and later saw him handed over his car to McClane. They tried to chase McClane with their own car and unfortunately lost him because of traffic. They also couldn’t find McClane because they noticed he messed up his own face to screw up facial recognition. McClane was good. His escaped was well-planed and he didn’t even tell everyone everything. He left certain things to him. The only thing Bell’s team knew for sure is that he felt bad about a guy dying after his hack and he wanted to make amends. Bell and Stabler both thought it was laughable that the guy wanted to reach out to his victim’s widow.

But they needed help. Bell tasked Jet with reaching out to Malachi. He was another hacker who sometimes work for the police department and he has helped her team in the past. Bell’s resident technology expert hadn’t wanted to contact Malachi, but she knows better that to refuse an order and so she brought in on the case. They needed to find someone who wouldn’t be recognizable by their cameras, who was hacker savant, and who recently spent several years in prison. McClane may have told his friend that he wanted to make things right. There was just telling if that was true or not. And in the meantime the police were looking for McClane.

The police were given an asset to help they track McClane. The feds authorized for them to work with Richard Wheatly and unfortunately Wheatly is being paid for this assistance. Stabler hated the man. Wheatly killed his wife and Stabler made it his mission to put Wheatly in jail. Somehow, Wheatly’s lawyers helped him escape charges and the federal government also dropped the charges because he agreed to work with them. Wheatly was therefore tasked with assisting in the prison break. He spent time in that prison. He knew certain characters and the police wanted his assistance in finding McClane.

McClane was the biggest threat out of all escaped convicts. Only there wasn’t much Wheatly could do once McClane’s old hacker signature was used to hack into the NYPD database. Crnobog otherwise known as McClane was demanding millions of dollars in return for freeing the system. They wanted the money in cryptocurrency. Bell’s team didn’t have access to the funds and Wheatly did. He agreed to pay the ransom. He said his cryptocurrency has a geotag included. They were able to trace his deposit and they found out someone withdrew eight hundred dollars of them in Queens. Bell and her team went to the location.

They were able to arrest Carlos Martinez. He was a hacker hired by an unknown person on the web to break McClane out of prison and he didn’t know who hired him or where the bitcoin came from. But Stabler put it together. Stabler realized that the person who paid Martinez was in fact Wheatly and that he started a fire just so that he could take credit for putting it out. He didn’t have evidence to back this up however he turned out to be correct because Wheatly later met up with McClane and they had dinner with his ex-wife Angela. She’s been in on it. She’s also been playing Stabler every chance she could get and so to get to Wheatly – Stabler finally has to deal with Angela.