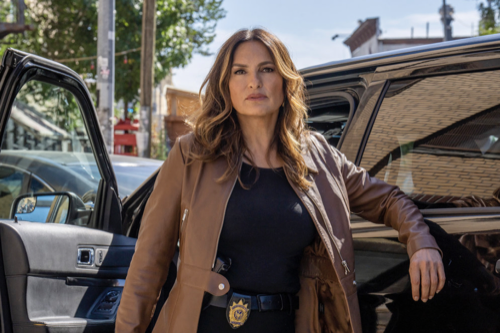 Tonight on NBC Law & Order SVU returns with an all-new Thursday, September 22, 2022 episode and we have your Law & Order SVU recap below. In tonight’s Law & Order SVU season 24 episode 1 “Gimme Shelter – Part Two,” as per the NBC synopsis, “A young girl is shot and Cosgrove teams with Det. Jalen Shaw to track down her killer. Benson and Stabler assist and realize it’s more than a typical homicide.

McCoy and Price seek justice against an international crime ring, but complications threaten the case.”

Tonight’s Law & Order SVU season 24 episode 1 premiere looks like it is going to be great and you won’t want to miss it.

In tonight’s Law & Order SVU episode, continuing from what happened in “Organized Crime”, Detectives Cosgrove and Shaw were questioning the pimp they found hiding with a fourteen year old girl. The girl was identified as Nicole Merrick. She was a foster kid that ran away from her abusive foster parents. Those people never even bothered to report her missing. They were probably still collecting checks while Nicole was being human trafficked. Nicole didn’t even wanted to believe she was trafficked. She thought she had finally found a home. She told the cops how she was with people who loved her and that she didn’t mind helping them.

It took Nicole hearing her pimp saying she never cared about her for Nicole to come to reason. She realized that those people weren’t her family and that they never cared about her. The pimp’s name was Sam Ellis. She basically spat on the whole relationship. She tried to save herself and so that pushed Nicole to finally do the same. Nicole told the cops what they wanted to know. She told them she was on the boat with another girl named Ava. Ava wasn’t as used to the life as Nicole was. Nicole slept with a Russian thug no problem. Ava couldn’t do the same. She fought back and Mark Sirenko chased her.

Sirenko eventually killed Ava. But he wouldn’t have done it if he hadn’t have been pushed into doing so by the other guy on the boat. The other guy wasn’t identified. Nicole didn’t know his name. She only knew Sirenko’s name. She identified him and the police went to go arrest him. They went to Sirenko’s house. They searched it for their suspect. They didn’t find Sirenko. They instead found a bomb making lab. Sirenko or his people were working on what appeared to be an IED. There looked like several of them were made and unfortunately they were missing along with Sirenko himself. And that’s a problem because NYC is a big place.

There could be hundreds of targets. The detectives at the scene called in the bomb squad and once those people cleared the area – they called in the FBI. The only way forward was a Joint Terrorism Task Force. The FBI didn’t want to play ball at first. Only there were three units already on the case. There was Organized Crime unit, there was the Special Victims Unit, and lastly there was Homicide. They all had their own detectives. They’ve all worked different points of this case and it was Captain Olivia Benson who cracked Nicole. It was Cosgrove who caught the initial murder that sparked the investigation. And it was Stabler who was looking at Sirenko to begin with.

Stabler called on his informant, Vince. Vince was an acquittance of Sirenko. The police wanted to use Vince to find out where Sirenko was targeting and unfortunately Vince wasn’t the right guy for the job. He had spooked Sirenko the last time he saw him. Sirenko naturally doesn’t trust Vince and so he lured Vince to a secluded building where he planned on killing Vince. Vince realized this. He tried to make a run for it. Sirenko caught up to him. Sirenko shot Vince before the police could intervene and once again Sirenko got away while Stabler’s CI was now dead. Thereby making it two murders that Sirenko was wanted for.

Stabler had a hard time with coming to terms with Vince’s death. He felt Vince was just a kid. He blamed himself and he wanted to find his killer and bring him to justice. The only good news was that Sirenko was on foot. He left behind his car. Which turned out to be a great thing. Jet was able to hack into the car’s tracker and while the bad guys thought they disabled it – the thing was still tracking them. It showed that Sirenko visited a house in Queens several times. The homeowner was in a retirement home. The renter turns out to be working for a hotel downtown in the city. The guy hadn’t wanted to work for Sirenko.

He did it because he thought he slept with an adult hooker. It turns out it was a teenager hooker and was most likely Ava and so the poor guy got blackmailed. He gave Sirenko badges as well as security codes at the hotel. He had no idea that Sirenko was armed with a bomb. The hotel was the place of several UN conferences. The Secretary of State was there. She was going to give a speech on helping the Ukraine. Something the Russians didn’t want. Its probably why Ava fought back. Ava was a teenage girl from the Ukraine. Her whole family was killed during the conflict. She came to the states to live with her aunt. And she got human trafficked.

Ava then found herself on a boat with Sirenko along with another guy. She probably overheard their plans and tried to escape in order to warn people. But then she was killed. Sirenko went ahead with his plan and the detectives caught up with him at the hotel when there wasn’t much they could do. All they could do was evacuate the building. They tried to clear it of as much people as they could, but the bomb eventually went off. They managed to see Sirenko again only he escaped in the chaos once the bomb blew. He was still on foot and so the detectives caught up with him again. They were just about to corner him when he took a hostage. He took a woman hostage.

They went into one of the stores. He then took everyone inside the store hostage. The entrance and the back exit were both covered. There was literally nowhere else for him to go, but he still tried to fight on. He tried to escape through the back with one of his hostages. He got caught. He got into a fight with Stabler of all people. Stabler wanted to kill him. He wanted vengeance for Vince. It was Cosgrove who stopped him from killing Sirenko. And while Sirenko laughed about it, Stabler was busy thanking Cosgrove.