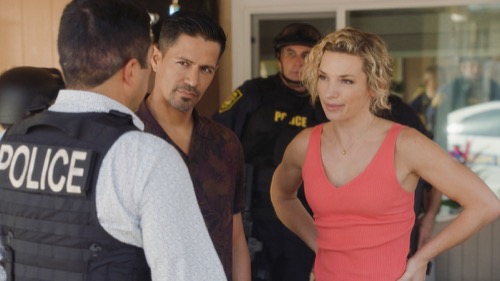 Tonight on CBS their reboot of the classic series Magnum P.I. airs with an all-new Friday, March 11, 2022, episode and we have your Magnum P.I. recap below. On tonight’s Magnum P.I. season 4 episode 16 “Evil Walks Softly”,” as per the CBS synopsis, “The mother of a suspected bomber hires Magnum and Higgins to locate her teen son and turn him in to the authorities. Also, Kumu and Rick help T.C. navigate his guilty conscience when he runs into a past flame.”

In tonight’s Magnum P.I. episode, Higgins went running with a friend of hers. The friend wanted to talk about Magnum. Namely, when are Higgins and Magnum are going to get together? Higgins claim it was never going to happen. She also wanted to know where this trend came from because her friend wasn’t the only person asking that question and Higgins was getting tired of it. Higgins also hated their couple’s name.

“Miggins”. It sounded like something from Harry Potter. Higgins wanted to change the topic so bad that she was first to notice smoke in the horizon. The smoke came from a bombing that happened on the island and it wasn’t no small bomb either. It happened near a gas pipe. It killed and/or injured at least twenty people and the FBI were going to need time before they could work the case.

It therefore fell on HPD to start doing what they could from then. They searched surveillance footage and they got a photo of their alleged bomber. They released it to the media and it was playing wall to wall coverage on the island. But a woman came by Robin’s house. She wanted to speak to both Higgins and Magnum and luckily they had been there at the same time. They spoke to the woman and she said she came because she saw the footage. She recognized the suspect as her son. The woman said her name is Nora Simmons. She believed the bomber was her son Ryder. Ryder is nineteen.

He was still a kid. Albeit a kid she thought could do this. Nora said her son Ryder turned into an angry teenager and that it hasn’t been easy since they lost his father. Ryder shut out his mother. She tried calling him after she saw the footage. She recognized what little she saw of the face and she said her mother knows when its their son and she knows the bombing was her son. She asked the private investigators to find him. She was afraid of her son hurting himself or more people. Magnum and Higgins agreed to take the case only they thought there was a chance that Ryder might be innocent and so they wanted to find him to get answers one way or another.

They first checked Nora’s house. They didn’t find Ryder there and so they went looking through his laptop. Ryder had a job interview at the place that got bombed. The interview took place a few days beforehand. It could be he took it to case the joint. But that still didn’t prove his guiltiness because why he did this was still unclear and so they kept looking. They even talked to a neighbor that Ryder looked upon as a surrogate father. The two PIs were still talking to neighbor Pete when the police showed up. Gordo was leading the charge and he wasn’t happy to see Higgins and Magnum. He took them to task for withholding information.

Gordo feels that the moment they learned who the bomber was – they should have contacted him. This wasn’t like the other times when they withheld information and it was harmless. This time the police were looking for a homicidal mad man. It didn’t matter that Ryder was still in his teens. What he did qualifies for him being treated like a man and not a kid. Gordo kept looking for Ryder. He didn’t it but Magnum and Higgins did the same thing. They went to Ryder’s old family boat. They heard from Nora that they had to sell the boat after her husband died because she couldn’t afford to keep it and that’s where they found Ryder hiding.

Ryder did plant the bomb. He was also the guy who pulled the fire alarm before it the bomb went off and that saved countless lives. Magnum and Higgins asked him why? He said someone forced him to do it. His exact words was that he didn’t have a choice. Later, after they brought him to Gordo, Ryder changed his story. He saw his mother standing with Pete the neighbor and he changed his story. He claimed he did the bombing all on his own. He even wrote out an official statement. There was just one problem with it. Ryder didn’t know how the bomb was made or how it was delayed going off.

Gordo didn’t buy his confession. Not once he realized that Ryder had no idea how the bomb was made. Gordo talked about with Magnum and Higgins. They told him what Ryder said about being forced to plant the bomb. The three of them decided to work together to prove that someone else was behind the bombing. Gordo talked to the prosecutor. Magnum and Higgins retraced Ryder’s movements leading up to the bombing. They got a tip that said Ryder took a bus from a certain street. The two PIs went there. They tracked a nearby florist and nursery. The business was closed when they arrived, but they broke in.

They found all the makings of the bomb. They also found a photo of Pete inside the business. Pete works there and he made the bomb. Which is why Ryder changed his story the moment he saw Pete standing with his mother. The poor kid was probably worried about his mother. He also didn’t know everything because Magnum and Higgins found a second set of blueprints. They called in Gordo. They found out that they had to turn off power in a section of the city after the bombing and so they looked at the neighborhoods’ buildings to find a match for the blueprints. And they found one.

It was a federal holding area full of unmarked bills due to be burned by the Federal Reserve. The only thing stopping a robbery once the power was shut off was the security guys and so HPD borrowed a mobile generator from the fire department and they turned the power back on right as the robbers were trapped inside. Its what they deserve. They caught red-handed. They will also take the blame for the bombing because Ryder had trusted Pete and Pete threatened to kill his mom if he didn’t do as the older man said.

Ryder was still in trouble, but he wasn’t facing life in prison anymore and his situation made Magnum how rough things were for him after he lost his own father.

TC meanwhile got a date and second chance with a woman he blew off years ago.