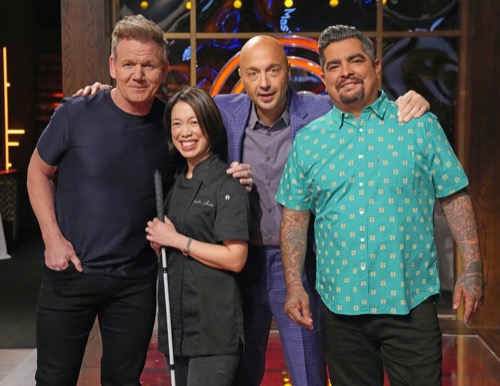 Tonight on FOX Gordon Ramsay’s Masterchef returns with an all-new episode on Wednesday, August 10, 2022, season 12 episode 11 called “Winners Mystery Box – Christine Ha,” and we have your weekly Masterchef recap below. On tonight’s Masterchef episode as per the FOX synopsis, “The remaining chefs are challenged with a “Winner’s Mystery Box,” curated by the Season 3 Champion, Christine Ha.

The contestants are tasked with creating a Michelin-starred Vietnamese dish, but there’s a catch – they must use every ingredient given to them.”

In tonight’s Masterchef episode, fresh off of the Team Challenge, the chefs were back to being judged individually. They were given a Mystery Box Challenge tonight. There was a giant box in the middle of the room when the contestants came in and right away they figured out what it was. They’ve been down this route before. They know a mystery box when they see one. But meeting Christine Ha was still a once-in-a-lifetime opportunity. The celebrity chef won her season on “MasterChef”. She’s since created a platform for Asian American women and for women with disabilities. She’s done MasterChef Vietnam. She is also a Brand Ambassador at the UN for Vietnam.

It was Christine’s idea to come up with tonight’s Mystery Box Challenge. She gave the contestants about eleven ingredients and those same people were told that they had to cook a Vietnamese dish with all ingredients fairly present as well as balanced. The winner of this challenge would get an immunity pin. Something they all wanted. The person who comes up with the worst dish would also get eliminated and so they kept everyone on their toes. It also made quite a few of them ambitious. Some went for a dish like Pho. It was typically a dish made over a few days and yet some felt they could do it in an hour.

There were actually a couple of people who tried to make Pho. They tried to save time by using a pressure cooker and that wasn’t the only dish that required one. Michael was using a pressure cooker for his beef and crab dish. Contextually, it sounded like it would be too much on a plate. But he thought he could pull it off. He added the crab because he said he wanted to put some of his own personality into the dish. His Bo Kho didn’t actually require crab. Then there was Emily. Emily doesn’t really like spicy food and so she had no clue what to do with her pepper. The pepper was one of the ingredients that were required in the dish. And Emily could just throw it in as a topping.

All ingredients had to be fully incorporated into the dish. Emily wasn’t the only one struggling. Brandi had started cooking Vietnamese dishes because she was a fan of Christine’s and now she was serving burnt items. Her pork belly got burned in the pressure cooker. The pressure cooker was great for many things. It just shouldn’t have been used as a shortcut for everything. Brandi burnt her dish. Bri was also adding a lot to her dish. She was doing salmon as the main protein. It was going to be a coconut puree. It was also going to include rice. It seemed like she was doing a lot and no one could really tell which direction she was going in until time had been called.

But Christine went around to all the dishes. She was smelling. She was asking questions. She even joked around with some of the contestants because Willie was elevating one of her own dishes and so she couldn’t wait to see how he delivered on it. Christine got to listen in as the judges noticed problems. The judges were especially talking about Michael. Michael waited until the last three minutes to plate his dish. He had wanted to keep his beef in the pressure cooker for as long as possible. It may even have cost him some points on precision only he got out. They all finished their dishes in time.

Not all of them finished the dish well. Bowen’s dish was so strong that Joe actually started to cough after tasting it. Bri’s dish turned out to be a different extreme. Everyone originally thought it would be too much. It turns out it was too late. Bri played it safe and tonight was about risks. Michael took a risk. His dish was called down as one of the top three. Michael created a Vietnamese Beef Short Rib Stew with Crispy Crab, Pork, & Mushroom Rolls. It looked delicious. It smelled delicious. It tasted delicious. Another person to make it into the top three was Christian. Christian created Vegetable Beef Pho with Roasted Okra. His dish looked so beautiful. It also tasted great. The only criticism they had for him was that there were too much noodles.

As for the final spot in the top three, that went to Dara. Dara created Rice Porridge with Seared Duck Breast and Sauteed Mung Beans. Her dish was so elevated that Joe called it a Michelin star dish. The winner of tonight’s Mystery Box Challenge was Michael. Michael got the Immunity Pin. He and the others were safe from elimination tonight. But someone had to go home. The bottom three were Bri, Brandi, and Emily. It was an all-female bottom three. They each did something so horrendous with their dish that the bottom was the only fit punishment for it. And yet not all three were eliminated tonight.

It was just Bri who went home. Bri was given several chances to come out fighting and she just failed to live up to it. And so tonight was her final night on “Back to Win”.