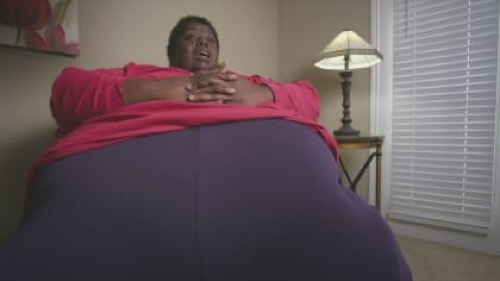 In tonight’s My 600-lb Life, Ontreon Shannon was thirty-six at the start of his journey. His doctors told him that he would suffer from heart failure if he didn’t change his ways and so he considered weight loss surgery because he wanted to see forty. He wants to live a long life. He wants to be there for his family. Ontreon is married. His weight was unknown. He just knew his weight wasn’t helping his other medical issues and that he had become a burden on his family. Ontreon has fallen in the shower. He was stuck there until someone came home and that’s why he doesn’t normally shower unless his wife or mother are home.

Ontreon came from a single parent home. He was raised by his mother. It was just the two of them because his other siblings were with the dad and so growing up he had to watch his family struggle. His mother sometimes worked up to three jobs in order to put food on the table. Ontreon didn’t realize this until he was a teenager. He always felt bad about being burden onto others. When his mother couldn’t watch him, he stayed with his grandparents and his extended family. They were all cooks. They all made sure to give Ontreon anything he wanted. He ate well growing up. He was a big kid and it wasn’t until other kids pointed how big he was that he started notice.

Then he suffered some tragedies. He lost his beloved grandfather. He went without a paternal figure because his estranged father never stepped up and then the kicker came after he was diagnosed with congenital heart failure. His heart doctor eventually dropped him as a patient because she didn’t think he could be helped and that sent him spiraling into a depression. Ontreon even considered killing himself. He only stopped because he found God. Ontreon was a big believer in the Christian faith and he later met his wife. The two have been married for two. His wife has tried to put him on diets. She’s tried to get him to eat healthy and he just won’t do it.

Ontreon also told her that he doesn’t want kids while he’s this big. Both he and his wife want children someday, but Ontreon was sorta hoping that prayer will do it rather than putting in the work or even trying a diet like his wife suggested and so he would be in a better position if he had as much faith in himself as he does in God. Ontreon claims to have tried everything to lose weight on his own. Only why did his wife find fast food cartons in the house. She tried to confront him about it and he told her that the bag was old and that its been there. And his wife was no fool. She knew darn well that the junk food bag was new.

Musa has tried convincing Ontreon to eat healthy. He ignores her. He said he was going to see Dr. Now to get weight-loss surgery and she made sure to go with him. A good thing, too. He tried getting junk food the whole trip going down there and his wife had to talk him out of it. Ontreon simply doesn’t his weight seriously. It wasn’t until he was in Dr. Now’s office that he realized he weighed over seven hundred pounds. He was seven- oh-two. He was worried about his weight. He later spoke with Dr. Now. He told the doctor how he didn’t like himself at this weight. He wanted to lose it and it took the doctor pointing out that surgery isn’t a cure.

First, Ontreon has to qualify for surgery. He has to lose fifty pounds in a month. It will prove to the doctor that he has changed his over-eating ways and that he was willing to exercise and him doing that shows how much he respects Dr. Now. Ontreon was unsure of the doctor before this. He’s now convinced that Dr. Now does want the best for him. Dr. Now was pushing Ontreon into losing the weight and he has the support of his family. Ontreon said he was finally doing what his wife always wanted him to do. He was eating right and working out. And she went with him when he went back to Dr. Now

They traveled all the way back to Houston to learn that Ontreon had only lost nineteen pounds. Ontreon considered it a success and Dr. Now did not. Dr. Now accused Ontreon of breaking his diet. He claimed he’s been good. He did say that his wife Musa was on him about the protein shakes and so Dr. Now asked about it. Musa said he’s been drinking protein shakes every day. She knows its not on the list of things he could eat. She tried to tell him and he argued with her till she dropped it. She also saw that he was eating peanut butter. He tried to tell her that it was in the diet book. She told him that it wasn’t. And he once again argued with her.

Ontreon said he was doing the right things. He said to the cameras. He said to his wife. He also tried to say it to Dr. Now and Dr. Now called him out on for lying. Ontreon hasn’t been doing anything right. He was cheating with the protein shakes. He was cheating on his diet when his wife was at work. She tried to get him to eat right. She even cooks food for the both of them so that they could eat right together and still he breaks his diet. Ontreon had a graduation at the church. He was training to become a pastor and so he was told to say a few words at the church later on. He went there dressed in his Sunday best. And he spoke in front of people.

Ontreon doesn’t usually like speaking in front of people because he gets nervous. This was different though because he got to celebrate his ministry success and he was hoping to be successful in another area of his life. Ontreon later had another appointment with Dr. Now. His wife was busy. She was working to get her green card and so Ontreon went with a family member. He soon learned that he gained six pounds. He was supposed to lose eighty pounds in two months and somehow he gains pounds? The doctor knew instantly he was cheating on his diet. He confronted Ontreon and Ontreon came up with several excuses.

He said he cheated a few times. Dr. Now told him that he was cheating so much that he was no longer dieting. He said he skipped a few workouts. Dr. Now told him that he was risking his life at this point. The doctor told Ontreon that he has to see a therapist to get help and so he booked him an appointment with Dr. Paradise. Ontreon later wen to the appointment. They discussed his eating. They also discussed the people that Ontreon has lost and the doctor gave him homework to do later. He asked Ontreon to write a letter about grief. He was a licenses minister now and so he wrote a sermon about grief.

Ontreon continues to work on his mental health. His physical health on the other hand took a turn when he broke his foot and so of course that gave him another excuse. And it was later shown that he had once again gained weight rather than losing it.

Ontreon won’t do the work to save himself because he’s still waiting on someone else to save him.