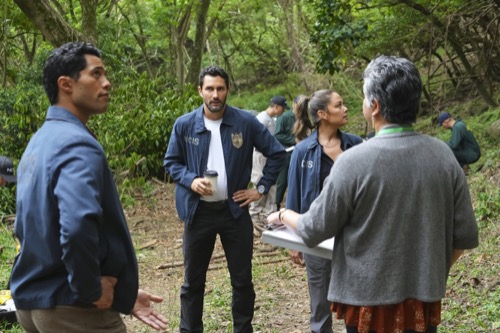 Seaman Apprentice Ella Baird’s remains were found in the woodlands. She had been partially buried. Besides the signs of that burial, there were no other signs on the body to indicate murder. But Tennant and her NCIS team still investigated Ella’s death as if it was murder. They saw signs that the heavy rain had brought down the body from up a high mountain. Tennant wanted to go up there with her team only that’s when she was told that up that particular mountain was a sacred place. It’s a kapu site. A holy place for Hawaiian culture. It’s also the place where there used to be human sacrifices.

Tennant had told the local woman that they would treat the area with respect. But that went out the window the moment they spotted the other burials. Their killer had buried the body of several other individuals. There were at least five victims in total. The team wasn’t looking for just any old killer. They were looking for a serial killer. A serial killer that was willing to taint an ancient holy site. The team called on all sorts to help them unravel the crime and one of them was CGIS Special Agent Pike. Pike had been looking for one of the people they found. The victim, like everyone else this killer targeted, had been an outdoors person.

Pike had been looking for a rock climber. The poor guy was visiting Hawaii on vacation and he wanted to climb some mountains when he disappeared. His body was never found in the location he told people he was going to be in. The only thing they ever found was a cell phone. Until now. Now, they have bodies. They can now prove it was murder even if they couldn’t figure out the method of killing these people. They had their medical examiner on the case and she was going to find something eventually. While they waited on the result of the autopsies, Pike gave Tennant the only lead he ever had.

Pike had a drawing of a suspect. The guy was known around the national parks as Joe. Joe also seemed to follow a few people that traveled any of the trails and so they’re drawing might be more important than they originally thought. Pike hadn’t gotten anywhere, but Tennant and her team could. They went looking for this Joe. They put out feelers all around the island. But Tennant also had other concerns. Tennant finally met her teenage son’s new girlfriend. Her son hasn’t been paying too much attention to school lately because of this new girlfriend and so that’s why Tennant asked to meet up with her. Only she didn’t know the girl was twenty-one.

Cassandra was a free spirit. She thinks she has life all figured out. She said the college is a scam. Tennant’s son was listening to her bits of wisdom and so Tennant was worried. She didn’t like Cassandra. She didn’t want Alex to be in a relationship with Cassandra. Tennant wanted to do something to end the relationship and her good friend Ernie did not intervene. First love is sweet but rarely lasting. Alex will see that too. Tennant just had to stand back and do nothing. Something she struggles with. Tennant chose to focus on the one thing she could change. And that was the murder investigation.

The feelers they put out for Joe yielded results. Joe was spotted in the woods. The team went there with a couple of members of the National Parks and they were all close to death when Joe began firing at them. Joe wasn’t using a gun. He was using a bow and arrow. Both of them were missing when they followed Joe’s trail and found him dead. Joe had been murdered by the serial killer. His autopsy at least clarified what happened to all the others. Joe had been shot with adrenaline. He was given such a high dosage that his killer watched him get frightened to death. And so the killer liked torturing his victims before killing them.

Pike had worked up a profile. He mentioned this profile before the National Parks Service members and that was bad news for him because one of the NPS was the serial killer. He didn’t like Pike’s profile of him. He waited until Pike was alone before coming up behind him and drugging him with adrenaline. Then he had Pike run for his life. The running and the fear were making his heart feel like it was going to explode. But he was found by NCIS before the killer could truly hurt him. Pike was saved. The killer died. The case was closed. The great thing about all of this is that Pike is now on better terms with the team.

Pike even considers Jesse a friend. He went to dinner at Jesse’s house and he met the guy’s whole family. Jesse’s wife is even setting Pike up on a blind date with her friend. And so this case did have a silver lining.