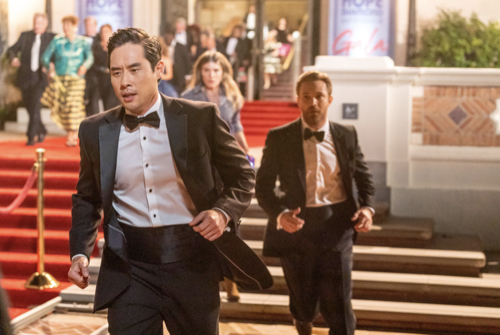 Tonight’s episode begins with the new Quantum Leap team at a party that Addison and Dr. Ben Song are putting on. She tells him that in 30 minutes they grab the bottle of bourbon and disappear. Ben gets a text that says they are running out of time, he looks sad.

Ben goes back to Quantum Leap and finds himself in 1985 and has no idea how he got there. He is in a van with a guy who is about to rob something or someone, he has a mask, gloves, and a gun, he calls Ben, Nick. Ben looks in the rearview mirror and he sees someone other than himself he has transformed into someone else. Ben gets out of the van and sees at the theatre Goonies and St. Elmos Fire is playing. A woman comes across the street and calls him Ben, it is Addison and he can’t remember her. An alarm goes off, and the guy who was in the van comes running out.

Addison tells him that she is a hologram from the future, and he should get in the van and go. Ben gets in the van and drives, Addison is in the passenger seat, and the robber, Ryan, is in the back of the van. The cops are chasing them, and Addison is guiding Ben who hits a pretzel cart and keeps going. Ben loses the cop and pulls up in an alley. Ben is glad it is over, he asks Addison for an explanation. She tells him that his name is Dr. Ben Song and he is a time traveler from the year 2022, and she is Addison, they work together and she is there to bring him home, then she vanishes.

Addison is back in the future, she tells Ian that they need to get that imaging back online. He tells her that Ziggy is offline. Right before Ben leaped, he uploaded a bunch of new code. Like a whole new version of the quantum operating system. For the past five years, they have been trying to figure out how to send someone to a certain point and time, and bring them right back so they don’t get stuck in the past. But they were still in the simulation phase, they were years away from testing, and yet Be, just suddenly and magically writes a whole near operating system and leaps. Addison tells Ian that Ben doesn’t remember anything. She tells him to make Ziggy to wait. She just wants to go back to Ben. Ian says he is scared too but Ben knew the technology wasn’t ready and he could lose his memory. He must have had a really good reason to do it and she is going to have to trust that.

Magic walks in, and Addison says he can’t remember anything. Magic says the pentagon is asking questions, he will eventually have to tell them the truth. Ian says the imaging cameras are back online. Magic tells Addison is there and brings him back home. Addison leaps and asks Ben why he did it. He tells her to beam him up. Addison tells him that he has to help Nick, then he will be able to come back home. She tells him about Sam Beckett and how he didn’t make it home. Ben tells her that Nick Rounder is part of a stickup crew and this is crazy. She tells him to think of her as his guide, she is going to help him get home. There is pounding at the door, and someone is calling for Nick.

Nick leaves the room and joins all the crew, they have a box full of explosives. The leader of the crew, Cole, asks Nick if he is getting cold feet. Cole tells Nick that if he screws up the next job they will kill him.

Ben finds out that Ryan is not a bad person, he needs money because his wife is on dialysis.

Ryan tells Nick that he has tried everything, but the bank won’t help him so he has to help them himself. Ben and Nick head to a jewelry store where they meet Horace who gives them the Hope Diamond, it is a fake and they have to swap it in the museum with the real one. Horace gives up the diamond when Addison is able to give him private information about Horace’s accounts that nobody knows.

Jenn found some scrambled footage, she thinks Ben is working with someone. The woman in the video was wearing a ring, it looks like a military ring. Magic tells her to follow her lead.

Nick and Ryan return to the crew. Cole tells Nick that he knows who he is, Matt Shaw, an undercover cop.

Ryan asks Nick if he is a cop, and he says no. Cole tells Nick he is a mistake and punches him in the stomach. They rip off Nick’s shirt to see if he is wearing a wire. Then, Cole threatens to kill him and he says if they kill a cop, the cops will never stop looking for them.

Nick is put in a storage room and handcuffed, he tells Ryan that this doesn’t change anything. He brought a cop into Cole’s crew, he is going to kill him.

Magic tells Ian that the Hope Diamond in the Smithsonian is a fake. If they can get the specifics on how this crew stole it, they can maybe stop it, save Ryan’s life and get Ben home.

Addison tells Ben that she joined the project to leap, he was supposed to be her hologram. She shows him how to get the ties off his hands, then he tells him to call 911, but Ben doesn’t want to, Ryan will go to jail and his wife will die, and his child will lose both their parents. He wants to stop the heist. She warns him not to do this, he might not get back. He says he is sorry, for leaping, for hiding all of it from them. He let them down and he can’t let Ryan down too.

Ben is at the Smithsonian, he has 15 minutes to stop the greatest jewel heist and save Ryan’s life. Ben/Nick sees Ryan and tells him that he has to leave with him, he says no, they will kill him. Ben then sees Charlie, and goes dancing with her, she tells him that the explosives are going off in five minutes. He says nobody will die, he has history on his side. She starts firing a gun into the ceiling and tells him that history is about to change. People start running outside, Ben urges Ryan to show him where the explosive is, it is in the trunk of a car parked outside of the museum, he takes it and throws it down a sewer. Ryan thanks him, and Ben tells him to go home and be with the people he loves, don’t hide things from them, he will regret it.

Cole and his crew were arrested, Addison tells Ben that because of the media coverage Ryan’s wife gets the help she needs and he actually gets his restaurant back. Ben leaps but something is wrong with the calculation, they’ve lost him. Magic goes to leave, but Jenn catches up with him and says the ring that the mystery woman was wearing, is from a Navy platoon that served in Vietnam. All Calavicci, he was from the original project, he died last year, his daughter is wearing his ring. Magic tells her to find the daughter.

Addison is in her apartment, she sees Ben’s phone, and he left her a video message. He tells her that he is sorry, there are things she is going to learn that she won’t understand but this is bigger than them. He will eventually find his way home to her and they will spend the rest of their life together.

Ben is in a spacesuit in a spaceship and has just been launched into space.