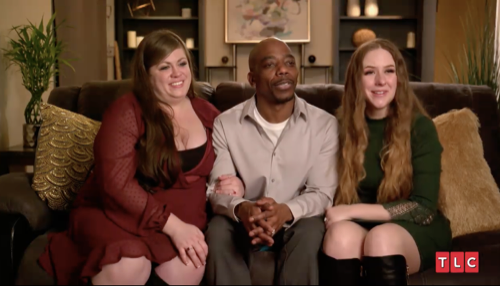 The Foleys strengthen their bond with April. Sidan contemplates the next steps with Arielle. Janae questions the Epps’ lifestyle.”

In tonight’s Seeking Sister Wife episode, Danielle and Garrick Merrifield were ready. They’re finally went to Brazil. They wanted to go see Roberta. They’ve bet everything on Roberta. They’ve had lots of ups and downs with her, but that doesn’t stop them believing that their future as a family includes her. They filed for a K-1 visa for Roberta. She hasn’t used it to book a flight to come to the United States and so they went down there to try and convince her to come with them when they returned home. The couple also hired a translator to help them. The translator’s name was Marcela. She was a nice woman. She had never met polygamists before and so meeting the Merrifields were a first.

Danielle and Garrick got an Airbnb. It was a nice house in a good area. They have Wi-Fi. They were able to call Roberta on their cell phone and she said she couldn’t wait to see them again. She also couldn’t wait to get pregnant. Which was a worrying concern for Danielle. Danielle didn’t think it was a good idea for Roberta to get pregnant while in Brazil. She thought the other woman should hold off until they were all in the US together. Garrick disagreed. Garrick didn’t care if Roberta let her visa lapse. He was willing to wait for her until she could make it to the United States. And he didn’t mind if she got pregnant in Brazil.

Over with the Davis family, they had some good news to share. Jennifer is pregnant. She was having a girl. This was Nick’s first biological child. He was worried about how he’ll be as a father. He was also worried about the family dynamic will be with Danielle in the picture. Nick was dating Danielle. She was considering becoming his wife like Jennifer and April were. Only this pregnancy changes things. The wives were super excited. Danielle however now has to consider sharing Nick with not just two women but now with the baby as well. Danielle did go shopping for baby items with the whole family. She seemed excited.

Only April also seemed excited. She was happy with adding a baby until she mentioned in her confessional that she did feel bad that it wasn’t her and that it was Jennifer who was pregnant. If April was struggling already, who knows what the future will be for Danielle. But the future was a big issue for many of the families. The Jones were wondering when will be the right time to add Arielle to the family. Arielle wasn’t American. She doesn’t even live in the States. She lives in the Philippines. To get her to the United States, Sidian will have to propose to her right away. It was the only way to get her a visa and then he would have to marry her within ninety days once she arrives.

Sidian talked about it with Arielle. She said she does envision a future with him and Tosha. She would be ready to come to the States whenever Sidian felt it was time to propose to her. The only person that Sidian had to talk to after that was Tosha. Tosha has already struggled with jealousy. She called him while he was visiting Arielle. She even asked him if he slept with the other woman yet and he hadn’t lied to her. He and Arielle told her they had. But if Tosha couldn’t handle him being on a vacation with someone else, how is she going to handle him being married to someone else? Saying you’re polygamists and being polygamists are two different things.

When Sidian did come around to talk to Tosha about it, she thought it was too fast. She remembered how Sidian left the States with only the intention of getting to know Arielle and now he was talking about marriage. Tosha did say to Sidian to trust his gut. This was the first time they’ve ever been as excited about someone in a long time. It was the first time that they pictured someone else in their family. So, there might be hope for Arielle. She does get along with Sidian. They have great chemistry. She also knows Tosha and has befriended Tosha. Something that’s very important in a polygamous marriage.

Back in Brazil meanwhile, Roberta came over to the Airbnb. It was a tearful reunion with both Danielle and Garrick. They all hugged. Roberta and Garrick kissed. It was a great reunion. It was great up even after they started asking the hard questions. Roberta agreed to stay at the house with them. She was happy to resume her sexual relationship with Garrick. She also wanted to wait to conceive until she was in the United States so that they could do so as a family. Roberta understood all of Danielle’s fears and she did her best to reassure the other woman. The only other concern was whether or not Roberta will fly out to Colorado to be with them.

Roberta said she would join them. She promised that she was going to be with them one day at the new house. And so Danielle and Garrick felt at ease. They firmly believed that Roberta would be joining their family.

Marcus’s potential sister wife Janae meanwhile got to meet his two wives Taryn and India. They had a long conversation. They had a difficult conversation. And at the end, Janae still wasn’t sure if she wanted to keep seeing Marcus.