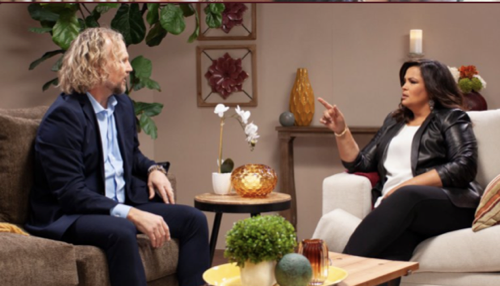 In tonight’s Sister Wives episode, the one on one conversations continued. Up first was Christine. Christine was asked about covid and how that transitioned the family. She was also asked about the nanny. Christine mentioned the nanny during filming. She didn’t think the family needed one because the kids were stuck at home with their mother. Its not like Robyn works.

Its not like Kody was even working much during the pandemic. But somehow a nanny is okay. Christine was told her kids couldn’t come over to see their kids and a nanny can come over instead. It didn’t make sense to her. Christine said as much back during filming and she was saying so now again. Its why Christine didn’t follow Kody’s covid rules. Kody came over perhaps a couple of hours every week and the girls barely saw him as it was.

It didn’t make sense to her to follow rules just to see him so sporadically. Not when Christine could break the rules and they could at least see some of their siblings and be surrounded by love. Its why Christine had thanksgiving in Utah. Her kids got to enjoy themselves and it took the edge off of not seeing their dad as much. Its not her fault that the kids have lost respect for Kody.

Christine and Janelle’s kids have noticed that Kody plays favorites. They noticed he was fine with spending all of his time with Robyn’s family and that he didn’t try as much to see them. Kody may claims he loves all of them, but sometimes he doesn’t act like it and his covid rules was one of those ways.

Kody asked his kids to follow the rules if they want to see him. His children by Janelle have said they follow the rules only for Kody to find out that they visited their girlfriend or something else that meant they weren’t in fact following the rules. Its why he told Janelle to put them out.

He said that they were eighteen and over and that she could put that out. Something she refuses to do. Janelle sided with her children. She will always side with her children over Kody and there was no changing it. Kody and the others all discussed what happened when he put out the Thanksgiving rules.

Meri expressed frustration. She wanted everyone to be together and Robyn did too. It just didn’t work out that way. Christine admits that if she and Kody were in a better place that she might have stayed in Arizona for Thanksgiving. Janelle admitted that she told her son the rules and they just flat out told her that they couldn’t follow those rules and so that solved things for her. Janelle and Christine’s great relationship is why they often choose each other. At least, over Kody. Kody on the other hand sees it as a clique and he accused them of bullying. Something they both denied. Janelle and Christine didn’t always get along.

Janelle mentioned they might have hated each other in the beginning. She thought Christine was a princess and it wasn’t until she found herself working all the time that the relationship improved. Christine became the primary caregiver for most of the children. The kids even to this day stick up for her and that frustrates Kody who wanted to lash out at her. He was trying to badmouth to her kids by Janelle when they told him that Janelle is a second mother to them and they refused to hear his complaints. Kody was asked about his feelings towards Janelle. He was asked if he was in love with her and he wouldn’t say “yes”. He tried to get out of it but he wouldn’t say sure.

Kody chose to say instead that Janelle wouldn’t say she’s in love with him either. Which was true. Janelle loves him. She calls him her best friend and still she wouldn’t say she was in love with him. Their relationship was more practical in that sense. The host also tried asking Janelle about her physical relationship with Kody and she said they were good. Christine was asked about it as well. Christine said Janelle wasn’t the type of woman that needed a man to fill her gas and that she was the sort to do it herself. And so Janelle was fine with her situation in the sense that she doesn’t feel the need for change.

Not like Christine or Meri felt. Which is why Christine divorced him. Christine was married to Kody in a spiritual marriage by their church officials and their officials haven’t actually issued a divorce only Christine said that doesn’t matter. She believes they’re divorced. She considers herself divorce and so she’s moving on with her life. Christine considered herself a basement wife for most of their marriage. She always put herself last and it wasn’t fair to her. It wasn’t fair that Kody never once put her first. Kody put in the work with Robyn and so why was Christine different? Kody likes to say that Robyn put in the work to join their family and that no one else has done as much or welcomed her as well as she did them. And some of that was true.

Janelle and Robyn didn’t get along in the beginning. Out of everyone, Robyn was closer to Meri and Kody said that none of the wives particularly like Meri anymore and that was more his shade than anyone else’s. Kody definitely hates Meri. He wasn’t hiding it or anything. Kody doesn’t hate Christine as much as he hates Meri. He still says that there’s chance Christine will go to heaven with him because he doesn’t know the mind of God and so there were amicable exes.