BY Kristine Francis on June 22, 2022 | Comments: Leave Comments
Related : Reality TV, Recap, So You Think You Can Dance, Television, TV 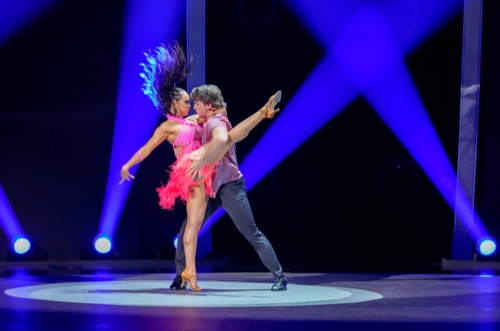 Tonight on FOX their Emmy-Award Winning So You Think You Can Dance airs with an all-new Wednesday, June 22, 2022, season 17 episode 6 episode and we have your SYTYCD recap below! In tonight’s So You Think You Can Dance season 17 episode 6 called, “Girls Night Out,” as per the FOX synopsis,“The journey of a lifetime continues as the Top 12 contestants head into the studio rounds. Dancers will showcase their talents, while they compete in pairs and in the style of the female partner.

The audience and our expert judges will vote on their favorite male dancer and favorite female dancer, and the bottom two dancers will go home.”

The opened with a group number of the top twelve contestants. It was fun. It was Contemporary. It was a nice way to greet everyone and it helped warmed up the contestants. This was going to be the first time that they were at risk of going home again since the top twelve were announced. Up first were Carter and Ralyn. Carter was in the bottom before and so he needed to redeem himself now. He was given a Contemporary number. Which was great for Ralyn because this was her genre. It wasn’t so great for Carter because he was a Ballroom dancer and Ballroom was light and all smiles while Contemporary like the one he was dancing to tonight was in fact dark, technically, and required an expression showing agony.

Carter mentioned he had a problem connecting with the audience during these types of dances. But the judges didn’t see that. They saw the emotion in him. They saw a connection with him and both he and Ralyn were on fire with this routine. Hopefully, it will save Carter from being at the bottom again. The couple that went next was Alexis and Keaton. They had the best dance of the night last time and they were hoping for the same with their routine tonight. They had Latin Ballroom. It requires a lot of passion. It needs lots of intensity. Keaton was single. Alexis was married. She got married at eighteen to her high school sweetheart. And this dance was out of their range.

Keaton has never been the player in a cat and mouse routine before. He’s never done Ballroom before. He chose to instead rely on his partner and it helped him because she at least knew what she was doing. Alexis was Ballroom. She was used to dancing with a partner and she taught him how to lead. The two of them pull on one hell of a show when they hit that stage. They looked amazing and their routine remains a highlight with the judges. Next up were Virginia and James. They had been in jeopardy last time and so they were ready to fight tonight. They were dancing to a Contemporary number.

They were also given a very healing routine by the choreographer. Virginia was taken advantage of by her dance instructor when she was a teenager and James himself has had issues growing up. Both of them have gone through some things, but they weren’t broken and they danced triumphantly. It was a very beautiful piece they had. Virginia stood out. James hadn’t. He wasn’t dancing his genre and he got a little lost in all that choreography. Virginia could have done this solo with the way everyone followed her onstage. It was only judged Leah who said that she needed to see more from her. She saw her pain. She just needed to see more of her overcoming that pain.

Next up were Jordan and Waverly. They will be dancing Jazz. Her field. His field was Contemporary and so Jazz was new for Waverly. He was still in school training. He hasn’t ever come across Jazz before and the show was the first time he had ever taken it on. Jazz wasn’t like Contemporary. It was fast-paced. It had personality. The dance was a great routine for this two because it was 50/50 the whole way. Both Jordan and Waverly each gave it their best and this should hopefully save them from elimination. After those two were done with the stage, it was Beau and Anna. They were doing Contemporary this week.

All their performance so far have been fast and upbeat. Anna wasn’t used to taking it slower. She struggled during practice and the choreographer told her to fake it until she makes it. Anna took that advice. It served her well because her later performance with Beau was perhaps one of the best of the night. Judge Jojo gave it a standing ovation because she loved this performance so much. The other judges enjoyed it, too. They all said great things about the chemistry between the two dancers. They also mentioned that they were growing into great dancers week by week and so they all looked forward to their next performance together.

Then there was Essence and Thiago. They received criticism last time they danced and so they wanted to make a comeback. They were given a Hip Hop routine. This was Essence’s genre and she had no problem with technique or the choreography. Thiago on the other hand surprised everyone with the way he was able to hold his own alongside Essence. And after all of that, it was up to Cat Deeley to announce who was in danger.

Jordan, James, Virginia, and Waverly were all in the bottom four. The judges deliberated and they chose to save Jordan and Waverly. And so Virginia and James were eliminated.