BY Kristine Francis on August 3, 2022 | Comments: Leave Comments
Related : Reality TV, Recap, So You Think You Can Dance, Television, TV 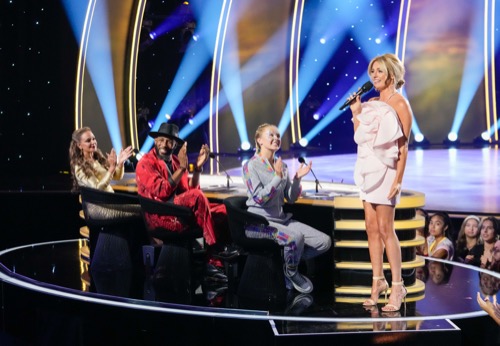 Tonight on FOX their Emmy-Award Winning So You Think You Can Dance airs with an all-new Wednesday, August 3, 2022, season 17 episode 11 episode and we have your SYTYCD recap below! In tonight’s So You Think You Can Dance season 17 episode 11 called, “The Final Cut,” as per the FOX synopsis, “The remaining contestants hit the stage performing two unique numbers before they head to the finals, first dancing together in pairs and then matched with one of the series’ beloved All-Stars: Kiki Nyemchek, Audrey Case or Robert Green.

Find out who will move forward to the season finale, when they’ll be given one last chance to prove they are “America’s Favorite Dancer”.”

On tonight’s So You Think You Can Dance episode, it was the Semifinals! Only three contestants were left to dance in the Semifinals. Keaton and Alexis were up first. They kicked off the night with a Bollywood number. There were some issues in the practice sessions because they felt the pressure to be as perfect as their last routine. There were also issues with learning a new style of dance so late in the game. They’ve pretty much-done everything by this point and so finding out that there was just one more thing to learn did seem daunting. The practice sessions were all about finding muscles they knew they had. They also got to be upbeat for this dance which wasn’t something they normally did on the show.

Alexis was more familiar with it because she has done Ballroom before. But Keaton was Contemporary. He was used to portraying emotional turmoil. Bollywood wasn’t something he normally did. It was something both he and Alexis learned for the show. They learned it and they delivered a memorable routine. It was good. It was upbeat. They had fun with it and the judges remarked that’s the happiest they’ve ever seen these two on the stage. After their routine, it was Essence’s turn to dance with Alexis. The two young women were given a Contemporary number. And that seems to be where Alexis shines the most.

Alexis was Latin Ballroom. Only she was great at Contemporary. She knew when to point her toes and could do the jumps and the flips. Essence not so much. Essence was Hip Hop. She was still figuring out pointed toes however she did shine with her routine tonight. Essence more sold the story than Alexis did. The story was about two women supporting each other during a moment of emotional turmoil. Essence played the woman struggling. She really sold this routine and she pulled off a great number with Alexis. Their routine was beautiful to watch. Essence also had another number right after that one.

The second number had her dancing in her own field. She pulled off a Hip Hop routine. Essence’s routine had to be perfect that time because it was her own field and she was the last on that field still in the game at that point. Essence also got to dance this particular routine with an all-star. The contestants always dance better with an all-star. Essence’s second routine went even better than her first. She displayed great talent in the second routine and she was hoping everything she did would help prove she should stay on. They were all hoping for that with their routines. Keaton’s second routine was also in his field.

Keaton was given a Contemporary number with an all-star. He had to portray a man whose girlfriend had left him and how he was struggling to come to terms with it. Keaton channeled his own past to help him with this dance. It was a great routine. There was amazing footwork in this number. His sense of control was so off the charts that it was the first thing that JoJo mentioned when it was her time to speak. Everybody loved his second routine. It was just Leah who said that his acting needed some work. She said that he could have better sold the story of the dance, but then again is all that Leah knows how to judge and so she might have a point on this one.

Alexis had her third routine next. She was given the Tango. They thought it would be in her field and it actually wasn’t. Alexis had never danced the Tango before. She was used to other Latin Ballroom routines. Not the Tango. She had to learn the Tango in order to dance with her all-star and then she pulled off a number that received mixed reviews. Leah said that Alexis lost sense of the story during the routine. At first, she was taking charge. She was pursuing the first half and everything got lost during the second half. tWitch got where she was coming from. And JoJo completely disagreed with both of them.

The final routine of the night belonged to Essence and Keaton. They pulled off a Hip Hop number. This was the second routine in which Essence got to dance in her field and so she knew she couldn’t have any flaws. But the last part for Keaton as well. Keaton wanted to make it into the Finals. Essence and Keaton pulled off a great routine. It was upbeat. It had an attitude. They had fun and it was a wonderful way to bring the Semifinals to a close. But then came time for elimination. Only two people were going to make it into the Finals and so someone had to be eliminated. The person eliminated tonight was Essence.

Essence is a great dancer. She has a bright future ahead of her and this won’t be the last the world hears about her.