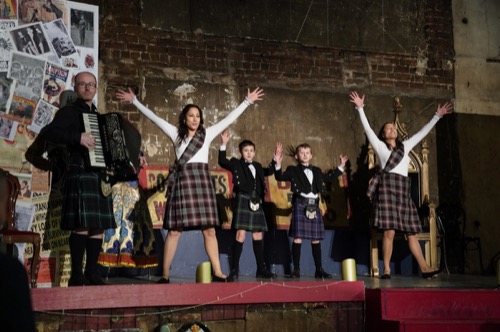 Tonight the CBS series The Amazing Race airs with an all-new Wednesday, January 12, 2022, season 33 episode 3 and we have your The Amazing Race recap below. In tonight’s season, 33 episode 3 called, “Who Has This One in the Bag?,” as per the CBS synopsis, “While racing through Scotland in February 2020, teams receive shocking and unprecedented news – for the first time in the show’s history, THE AMAZING RACE suspends production due to the COVID-19 pandemic.”

Tonight’s episode begins with Ryan & Dusty, best friends, they were the first to find out that they are still racing and will be travelling by train, over 400 miles. from England to Glasgow Scotland. Teams will find their next clue on the windshield of cars at the NCP car park. The other teams start departing and getting into the train. In the train, the teams get beds so they can rest until they race again in Scotland.

When the train arrives, Taylor & Isaiah are in first place. Teams must now drive themselves across Scotland’s largest city to Glasgows west end and find Oran Morto pick up their next clue.

The teams arrive at a Roadblock, “who thinks they have this one in the bag.” Teams must join a Scottish bag pipe ban and they must assemble a bagpipe using a bag, bag cover, mouthpiece, drone pipes, and more. When done they must play a note of a traditional Scottish anthem and the Pipe master will hand them a clue.

Kim & Penn are currently in first place, she assembled the bagpipe and played it successfully. They must head to Alexander Park and locate a fountain to find their next clue. Ryan & Dusty are in second place while Natalia and Arun are lost and arguing. But, they are not the only team having a hard time getting there. The vehicles are standard and they are driving on the right side of the vehicle, on the opposite side of the street and teams are struggling. Other teams start arguing as well, the stress of being lost is getting to all of them.

Kim & Penn have found the fountain and get their next clue, a detour and they must choose between challenges. In “KILT” teams must wear full highland dress they must sing and perform a famous Scottish song and when they do their performance perfectly they will get their next clue. In “REBUILT” teams must work at putting tops on barrels, not as easy as it looks and they need the master to approve their work.

Connie & Sam have just arrived to make the bag pipe while Kim & Penn have decided to perform the Scottish song; they must learn the dance and the song. Ryan & Dusty watch a demonstration for the barrels and then get to it. Meanwhile, Natalie & Arun have caught up and she ends up helping two teams and Arun is not happy about it, he tells her that she wasted five minutes and if they lose this leg, it is going to be on her.

Akbar & Sheri are in ninth place, they just finished making the bagpipe, Taylor & Isaiah are in last place. Natalia and Arun went in the wrong direction again, they should have asked for directions, they are losing ground.

After a second try, Kim & Penn finish the performance and get their next clue. At this point, teams must head to the University of Glasgow and search for Phil, this is the Pit Stop and the last team to arrive will be eliminated.

Kim & Penn are team number one to arrive at the Pit Stop and they have won a trip to Cape Cod, Massachusetts, they will spend five nights there’ play golf, go to a spa and play lawn games.

Lulu and Lala were in place in the previous leg, but they have chance, they are presently in seventh place.

Ryan & Dusty are team number two, Anthony & Spencer are team number three to arrive at the Pit stop. Akbar and Sheri are in last place they are getting discouraged but they thought about disadvantaged children and it gave them the courage to continue.

Akbar & Sheri are in ninth place, but they are running to the car because they know that Natalie & Arun are not doing well, they are probably on their tenth try and they are presently in last place. Meanwhile, Lulu and Lala keep they pace and are team number seven to arrive at the Pit Stop and couldn’t be happier that they made up time.

Both teams are having a hard time getting directions to the University of Glasgow, so it is still anyone’s win at this point. Natalie is just kicking herself at this point for helping those other teams.

Akbar and Sheri are team number nine at the Pit Stop.

Natalie & Arun are the last team to arrive and they have been eliminated from the race. Arun says it is the best experience that he could ever have hoped for, they both say they will never forget the experience.

February 28, 2020, Phil gathers everyone to make an announcement. They Amazing Race has travelled a million miles across the world, one hundred countries, and from day one their number one priority is that they are safe. The world is dealing with Coronavirus and they have decided to suspend the race for the time being. 19 months later, the race resumes in St. Gallen, Switzerland.