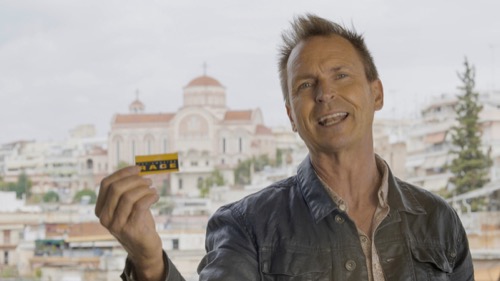 Tonight the CBS series The Amazing Race airs with an all-new Wednesday, February 16, 2022, season 33 episode 9 and we have your The Amazing Race recap below. In tonight’s season, 33 episode 9 called, “Rock Bottom,” as per the CBS synopsis, “Racers leave no stone unturned while looking for a clue in Thessaloniki, Greece.”

Tonight’s The Amazing race episode begins in Kallikrateia Port, Greece. Kim & Penn, Raquel & Cayla are the first teams to depart and they must drive thirty miles north to Greece’s second largest city, Thessaloniki, an ancient city dating back twenty four centuries and look for Theatro Dassous where they will find their next clue. They are down to four teams, there is so little room for error at this stage in the race.

Kim is doing the best she can, the map they were given doesn’t even have their current city on it. Ryan & Dusty, Arun & Natalia, are the last two teams to depart. Ryan & Dusty know that being the first teams to leave means a lot, but they are trying not to get deterred. Kim finally figures out the map, they are on the right road – they found the theatre. It’s a Roadblock next, “who will leave no stone unturned.”

Teams must now go on a search leaving no stone unturned as they look under hundreds of stones to find a gold coin that they will need to find in order to get their next clue. They are the first team, they have a better chance because there are four gold coins.

Raquel & Cayla are having a hard time with the road signs because they are not in English. And there are minimal street signs, nobody speaks English either. Kim is still looking, her back is hurting when Raquel & Cayla arrive and Raquel decides to do the Roadblock.

Arun & Natalie are the last team to arrive, Arun starts looking for the gold coin – he hopes he is lucky. Dusty is losing his patience and little does he know that there was one of the rocks with the gold coin near his foot. Everyone is frustrated, they think they have flipped over every rock. Raquel finds one, she and Caryla are thrilled.

Next, teams have to head to Trigonion Tower and listen to words of wisdom to get their next clue. Kim finds one a Penn is so happy, she is so tired she is almost in tears. Arun is the next to find and Dusty is left frustrated, there is only one left. Raquel & Cayla listen to the words of wisdom and get their next clue, it’s a Detour. Teams will have decide to deliver plates with tender loving care or smash them to smitherines.

To deliver plates, the must safely carry 300 of them up a hill to a café. Once there, the restaurant owner will give them their next clue. In “Break ‘Em” teams must smash through a pile of plates but only when the band is playing until they find one with a clue inside with the name of their next pit stop.

Dusty has been turning over stones for more than two and a half hours and says what he would do to make cheese again. Raquel & Cayla smash plates and it doesn’t take that long before they get their next clue, they must head to White Tower, the pit stop for this leg of the race. Raquel & Cayla are the first team to arrive at the Pit Stop, and they win a trip for two to Kawaii.

Meanwhile, Dusty had found his kryptonite, he still hasn’t found the coin and it is not in the vicinity of where is looking. Kim & Penn are smashing plates, and they have found the clue. Arun & Natalie have yet to arrive at the Detour. Kim & Penn are team number two and Penn tells Phil that was a day. Dusty begs to be hit with lightening. Ryan encourages him to take a break and enjoy the view, it is spectacular. It helps, Dusty has a temper and this challenge almost brought the anger out in him.

Dusty finally finds the gold coin, he and Ryan are currently in last place. Arun & Natalia finally arrive at the Detour. Arun & Natalia are smashing the plates and they quickly get the clue. Ryan & Dusty are also smashing plates and find their clue easily as well.

Arun & Natalie are team number three at the Pit Stop. Ryan & Dusty are the last team to arrive at the Pit Stop. Dusty tells Phil that he worked hard as a person today, Phil tells him the good news is that this is a none elimination leg. They will be leaving last on the next leg, today was their lucky day.