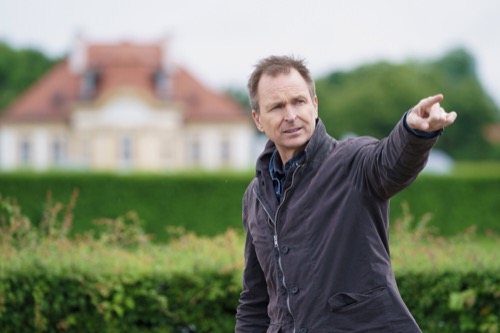 Tonight the CBS series The Amazing Race airs with an all-new Wednesday, September 28, 2022, season 34 episode 2 and we have your The Amazing Race recap below. In tonight’s season, 34 episode 2  called, “Passion’s Harvest and a Sheldocracy,” as per the CBS synopsis, “Teams explore the beauty of Austria and must learn a traditional wedding dance, yodel and a song performed on alpine bells, on a special 90-minute episode.”

Tonight’s The Amazing Race episode begins with teams The Newlyweds, the Former Rams Cheerleaders and Team Big Brother are the first teams to depart in the second leg, they are happy to get a head start. All teams must drive themselves from Munich, Germany to Innsbruck, Austria known for its impressive mountain views and yodeling.

Glenda and Lumumba stop for directions and disagree on which way they are going. Derek and Claire stop a passerby and get directions, and so do Quinton and Mattie.

Four more teams leave in group 2, Rex jokingly says he is looking for a new partner, but they both agree they have to clean up their navigation. The Military Brothers are in this round and they are happy being with team T-Rex, they love their vibe.

Derek tells Claire they did it right last time, they just have to rinse and repeat.

Team T-Rex is following a team of Military brothers who are better at navigation. Glenda says the race means a lot to them because they will be starting their family right afterward. Quinton and Mattie stop for directions, looks like they may be lost. They were looking for the location in Germany, not Austria, a rookie mistake.

Looks like Derek & Claire are in the first place and it’s a Roadblock, “who wants to call in the cows?”In this challenge, they have to sing three different yodels, with hand motions. Rex thought he was going to kick some butt and do the yodel, but he is dyslexic and has trouble with the words. Also, teams have to dress up in the provided cultural wardrobe.

Will and Abby are in last place, or so they thought, Michelle and Luis went the wrong way and they are actually now in last place.

Marcus and Michael are first to finish yodeling and have to head to Marktplatz, Innsbruck, Austria, to receive their next clue. Glenda is a sound rhythm person, it doesn’t take long for her to finish and they are in second place. The couple is hilarious, they keep saying they are playing for their unborn child they have nicknamed, Boom Boom.

Linton and Shark are in third place. Derek and Claire are falling behind and he says it is so hard to watch her yodel. Emily and Molly are in fourth place.

Marcus and Michael choose the bells and they are learning fast.

Abby and Will crushed the yodel challenge and jumped ahead. Claire feels bad, she thinks she is letting down Derek.

Unbelievably, Rex finishes before Claire. Finally, Claire and Derek do it, they are on their way but not in last place, Mattie and Quinton are the last teams to arrive to complete the yodel.

Teams are having a hard time finding the Detour, this may give Claire and Derek enough time to catch up.

Marcus and Michael are in the first place, they finished the Bells Ringing. They have to make their way to the Pit Stop at the Imperial Palace and Great Hall. No more second chances, the last team will be eliminated.

Marcus and Michael are team number one at the Pit Stop, they have won an Expedia reward points good for five nights in Lima, Peru.

Aubrey and David are team number eight and still in the race.

Rich and Dom are still in the race, they are team number nine. Quinton and Matte are the tenth team to arrive.