The Bold and the Beautiful Preview Week of December 5: Deacon Grilled By Steffy & Finn About Sheila’s Staged Death 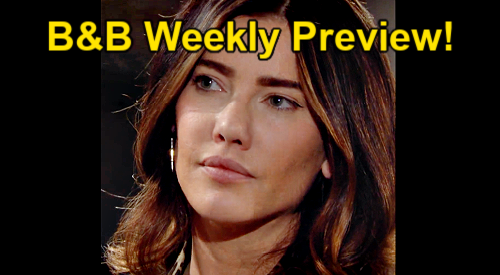 B&B spoilers for the week of December 5 reveal that Finn will receive Sheila’s remains. Since the only part of Sheila that was left after the “bear mauling” was her toe, that must be what Finn receives.

However, Finn is a doctor. While the forensic team and detectives somehow missed this big clue, Finn will probably notice that the “mauled” toe is cleanly sliced.

In the weekly preview clip, Finn tells Steffy that Sheila isn’t dead. The couple realizes that Sheila staged her death, which shouldn’t be too much of a shock.

After all, Sheila has done this kind of thing before.

In the preview clip, Finn makes a vow. With a furious and determined look on his face, Finn promises that Sheila will go to prison for the rest of her life.

The Bold and the Beautiful spoilers reveal that Steffy will be concerned about Finn’s search. Steffy lost Finn once already and doesn’t want something like that happening again.

Steffy also nearly lost her life after confronting Sheila. So, fans might see Steffy worry about what happens when they confront the villain.

Finn and Steffy decide to turn to the only “friend” that Sheila had before her “demise.” That person is Deacon.

However, Deacon panics and lies to “SINN.” Deacon claims that he hasn’t had any contact with Sheila while Steffy looks sceptical.

The Bold and the Beautiful Spoilers: Walls Closing In

Even though Deacon swears he hasn’t had contact with Sheila, Finn and Steffy doubt his story. Finn and Steffy will also share their theory with friends and family. So, everyone is going to be on high alert.

Deacon might have covered for Sheila for the moment, but he is starting to come apart at the seams.

Deacon makes a threat, which causes Sheila to strike back. With it being teased that there will be a manhunt for Sheila, what does that mean for Deacon?

Be sure to catch up on everything happening with B&B right now. Come to CDL for the best and most accurate The Bold and the Beautiful spoilers, news, and updates.

The walls are closing in…what will Sheila do? 🤔 #BoldandBeautiful is new this week on @CBS! Watch the latest episodes on @paramountplus. pic.twitter.com/reAOeuhePb