BY Heather Hughes on May 14, 2022 | Comments: Leave Comments
Related : Soap Opera, Spoiler, Television, The Bold and the Beautiful 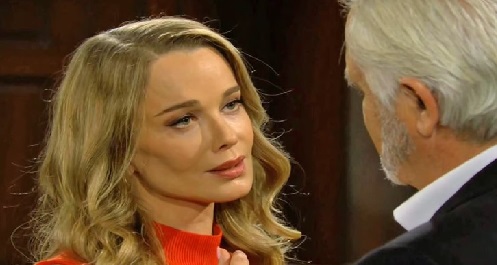 The Bold and the Beautiful (B&B) spoilers tease that Eric Forrester (John McCook) may be tempted to end his Donna Logan (Jennifer Gareis) affair after a shocking family crisis. Will Eric see a new loyalty in Quinn Forrester (Rena Sofer) that changes everything?

B&B fans know Eric has been struggling since he feels guilty for cheating on Quinn, but he can’t stay away from Donna either.

Of course, that seems like a weak excuse. Eric could resist Donna if he really wanted to, so this idea that Eric can’t stop is nonsense.

What Eric needs is a reason to recommit to Quinn and their marriage – at least if the story is headed in that direction.

It could indeed be what the writers have in mind based on spoilers for the week of May 16-20.

That’s when Quinn and Eric will come together for the Forrester family when it matters most.

There’ll be a crisis related to the fallout of Sheila Carter’s (Kimberlin Brown) schemes and who Ridge Forrester (Thorsten Kaye) will choose romantically.

Ridge will have to decide whether he belongs with Brooke Forrester (Katherine Kelly Lang) or Taylor Hayes (Krista Allen) now that the truth about New Year’s Eve has been exposed.

Steffy will also have to truly face the loss of John “Finn” Finnegan (Tanner Novlan) once Sheila is arrested. All the drama will wind down and leave Steffy to accept that her husband is gone, so she’ll have a rough time of her own.

Since the Forrester family will be dealing with so much turmoil, Eric may put his affair on hold. The Bold and the Beautiful spoilers say Quinn and Eric will stand together as this crisis hits hard, so feelings could shift on Eric’s side of things.

Quinn will prove her loyalty and step up in a big way, so Eric could start looking at her with fresh eyes.

Once Eric grows closer to Quinn during the latest round of Forrester chaos, he might see the potential to genuinely heal their marriage.

That could mean Eric will consider dumping Donna, but he might want to have one last romp with her first.

Now that Quinn has handed over that health ring, it’s bound to play a role in the exposure of Eric’s affair.

In other words, Eric might break up with Donna and hit the sheets with her once more as a goodbye – giving Quinn the chance to discover what’s really got his heart rate up!

After Quinn figures out the truth, Eric may have to beg his wife to understand and look beyond his cheating mistake.

Even so, it may be significant that Quinn and Eric are about to unify during some family trouble.

It’s pushing a little Forrester acceptance and bringing “Queric” together again, so that could pull Eric back toward Quinn.

The Bold and the Beautiful spoilers say some twists are brewing in this love triangle, so stay tuned.

CDL’s where you want to be for hot B&B spoilers, updates and news, so pop back in soon.