The Bold and the Beautiful Spoilers: Friday, May 13 Recap – Sheila Rats Thomas Out, Confesses to Making Brooke Drink

BY Heather Hughes on May 13, 2022 | Comments: Leave Comments
Related : Soap Opera, Spoiler, Television, The Bold and the Beautiful 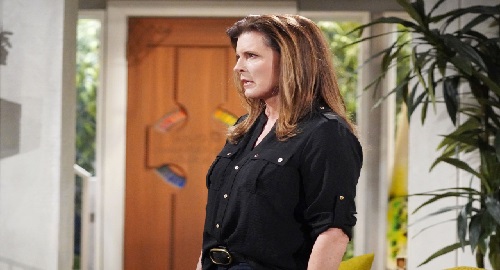 At the cliff house on Friday’s B&B Episode, Sheila insisted that John “Finn” Finnegan’s (Tanner Novlan) death was an accident and continued to blame Steffy Forrester (Jacqueline MacInnes Wood) for setting it in motion.

Taylor Hayes (Krista Allen) couldn’t believe Sheila had the nerve to hold Steffy at fault. Ridge Forrester (Thorsten Kaye) agreed since Sheila put a bullet in her own kid!

There was lots of Sheila trashing, but she argued that she had changed and brought up the fact that she saved Taylor’s life.

Taylor thought Sheila was despicable since she knew the truth the whole time. As Taylor fumed, she called Sheila the “same heartless bitch” she’d always been.

Sheila tried to act like she wasn’t thinking that night in the alley, but Ridge pointed out that she thought enough to make it look like a robbery.

After Sheila rambled about wanting to see Brooke lose to Taylor, she argued that they had no idea how far above and beyond she’d already gone. Sheila insisted Steffy knew the truth and urged her to share what happened on New Year’s Eve – what she put on the line for Taylor and Ridge.

Steffy eventually flashed back to the alley confrontation and gasped over Sheila sabotaging an alcoholic. Although Steffy was still a little hazy on the details, Sheila confirmed that she switched the Champagne labels and made sure Brooke drank the real thing.

Sheila ranted about Brooke judging her as if she had never done anything wrong. Quite frankly, Sheila thought her life was none of Brooke’s business!

Ridge seethed over Sheila making his wife drink and blamed her for everything that happened after that turning point. Sheila disagreed and suggested that what went down with Deacon Sharpe (Sean Kanan) was all on Brooke.

Once Sheila insisted she was trying to help, she said they should ask Thomas. Taylor argued that Thomas would never keep what Sheila did a secret, but Sheila felt Thomas saw the good in what she was doing.

Steffy remembered hearing Thomas on the phone with Sheila, so she reluctantly confirmed his involvement. Ridge pointed out that Thomas would be dealt with later and went back to slamming Sheila for playing with people’s lives.

After Ridge warned that no one could ever forgive Sheila, he added that she needed to be locked up. Ridge promised to spend every chance he got making her suffer.

Steffy ran down the list of Sheila’s crimes again and said there was a special place in hell for her. That’s where Steffy felt Sheila was going after she spent the rest of her miserable life behind bars.

Steffy declared that Sheila had tormented her family for far too long and made it clear that her reign of terror was ending today.

At Brooke’s house, Deacon felt that maybe Taylor reaching out could mark the start of a whole new beginning for Sheila. When Deacon hinted about Sheila and Taylor’s life-altering experience, Brooke and Hope Spencer (Annika Noelle) grew curious.

Deacon ended up admitting that Taylor saved Sheila’s life and explained the ledge situation. Brooke found that hard to believe and felt it’d be more likely for Sheila to take a life instead.

Brooke also wondered about the nature of Deacon’s relationship with Sheila – and Hope piped up that she’d like to know about that, too. Deacon joked about Brooke being jealous, but he clarified that he related to Sheila because of her mistakes.

Hope and Brooke thought Sheila’s mistakes were far worse than Deacon’s, but Brooke did feel bad for her as a mother. Deacon said it just took one person to reach out, but Brooke argued it couldn’t be her and pointed out Ridge would never allow it.

After Deacon suggested maybe he was the jealous one, he talked about Ridge getting support despite staying in the same house with Taylor. Hope corrected Deacon since Ridge was actually staying at Steffy’s guesthouse, but Deacon still felt it was too close for comfort.

Brooke took the blame for betraying Ridge’s trust and reflected on New Year’s Eve again. After all this time, Brooke still didn’t know what caused her to drink.