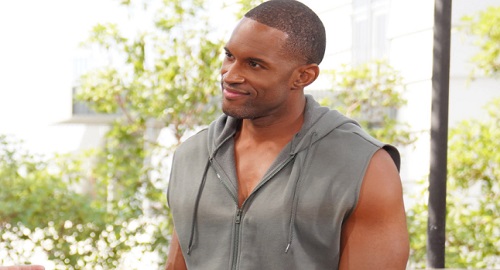 At Forrester Creations, Steffy Forrester (Jacqueline MacInnes Wood) said it was only a matter of time until Brooke let Ridge down again. When Taylor Hayes (Krista Allen) walked in, Steffy suggested her mom knew she was right.

Hope Spencer (Annika Noelle) pointed out that she’d seen the stolen moments between Taylor and Ridge. Steffy argued that the only reason Ridge was staying with Brooke was to help her with her broken ankle.

Ridge was finally waking up and realizing Taylor was the love of his life – at least according to Steffy. After Hope left, Steffy reassured Taylor that she was right about who Ridge belonged with. Ridge loved Taylor, so Steffy urged her never to forget that.

Taylor pushed Steffy to focus on John “Finn” Finnegan (Tanner Novlan) and the family they’d built together. Steffy just didn’t want Taylor and Ridge to wake up one day and realize they could’ve done things differently.

Taylor argued that Ridge was married to someone else, but Steffy insisted Brooke was toxic and wondered what advice Taylor would give herself. Steffy knew that Taylor wanted Ridge back and for their family to reunite.

In the gym area, Thomas Forrester (Matthew Atkinson) worked out with Carter and hoped to pick his brain about some legal stuff – namely custody of Douglas.

Thomas was ready to be a full-time father and have more responsibility, so he felt it was important to work together with Hope on this. That was especially true since they weren’t living together.

Carter hoped that Thomas had accepted that Hope was with Liam Spencer (Scott Clifton) and that this wasn’t about his attraction to her. Thomas acknowledged that Hope was a beautiful woman, but this was about Douglas and how much he adored his mother.

Carter sensed there was another issue, so Thomas explained the battle for Ridge’s heart and how Hope disagreed with the Forrester siblings.

As for the Douglas situation, Carter’s advice was to keep things amicable for Douglas’ sake – though Thomas feared the tension might get worse if Ridge went back to Taylor.

When Thomas joined Steffy in the office, they teamed up on trying to convince Taylor that she belonged with Ridge. Taylor said she was so lucky to be loved by Thomas and Steffy.

At Brooke’s place, she pulled away from her hug with Bill and insisted this wasn’t what it looked like. Bill piped up to say it was a hug goodbye and that Brooke had helped him since Katie Logan (Heather Tom) was giving him the cold shoulder.

As Bill prepared to leave, Ridge urged him to call ahead next time – or better yet, don’t come at all. Bill reminded Ridge that Brooke was an incredible woman and warned that he’d be a fool to blow it with her.

Once Ridge was alone with Brooke, he declared that Bill had a lot of nerve. That said, Ridge claimed he wasn’t the jealous type and that he knew nothing happened. It’s just that Ridge didn’t like coming home to find men like Bill and Deacon Sharpe (Sean Kanan) in their home.

Brooke pointed out she was concerned about Katie and couldn’t just send Bill away. The important thing now was that Ridge was there with Brooke, who was so grateful that he’d moved back in. Brooke pulled Ridge close and declared that he was the man she loved and that she would always love.

Not every relationship was perfect, but Brooke felt they had a very strong foundation and that they wouldn’t let anyone destroy that. Brooke reiterated that she loved Ridge and that her heart still skipped a bit when she looked at him.

“Because you and all of this is my destiny,” Brooke said before sealing it with a kiss. Ridge smiled as he nuzzled Brooke close.

Back with Steffy, she told Thomas that Ridge’s time with Brooke needed to end. Steffy was agitated as they agreed Taylor and Ridge had to be together.

“We need to make it happen, Thomas,” Steffy declared.