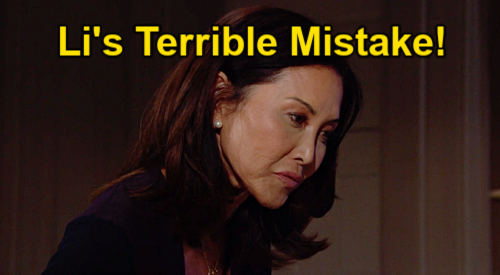 The Bold and the Beautiful spoilers document that Li Finnegan (Naomi Matsuda) continues to behave impulsively, driven by the intense emotions that her estranged husband, Jack Finnegan (Ted King), created. Yes, it is Jack, not Sheila Carter (Kimberlin Brown), that Li loathes the most.

As devoted viewers recall, Jack was forced to acknowledge that he had an affair with Sheila decades ago that led to John Finn Finnegan’s (Tanner Novlan) birth.

As out of character as it seemed, Sheila bowed out of her son’s life by following Jack’s directive.

King’s character told his wife that he knew of a woman who could not raise her newborn boy.

Jack made Li believe that they were satisfying their desire to have a family by adopting the boy they named after Jack, when he was Finn’s biological father.

Jack was not the loyal husband he long pretended to be. One wonders, as Li must, if he had cavorts with other women through the years?

Li could not stomach Jack’s revealed betrayal, separating from him after he told her the truth.

While Jack and Sheila had a romantic connection decades ago, they were never in love and do not have those feelings for each other today.

Jack’s shame has limited his presence in recent months, as fans have not seen King’s character.

But that is likely to change as the next turn in this well-written story line unfolds.

Bold And The Beautiful Spoilers – Li Finnegan Makes Another Mistake

It was more than a mistake to sign Finn’s death certificate. Li committed a crime that should eventually cause her medical license to be stripped.

Compounding the above, Li’s care for Finn, while well-intentioned, leaves him vulnerable to dying.

Finn should be in a hospital under the care of a medical team.

But Li did not want to allow his wife, Steffy Forrester Finnegan (Jacqueline MacInnes Wood), to make life and death decisions.

Li’s next mistake is terrible, as she visits Sheila in jail. Teasers indicate Brown’s character will escape at a later point in the plot.

It is reasonable to project that her intended destination could be where Li is caring for Finn.

Bold And The Beautiful Spoilers – Sheila Carter Locates Her Son?

It would be fitting to have Sheila break out of jail because she intends to find her son and bring him to safety.

Sheila is wrongly charged for Finn’s murder when she should only be facing justice for attempting to murder Steffy and for shooting Finn.

Sheila can not plausibly escape a return to jail, assuming she is captured or turns herself in, if she does find Finn.

But TPTB could write Sheila to Finn’s rescue and then her own escape.

B&B’s greatest of all-time villain has eluded the legal system before. So, Sheila’s next escape could be short-lived or lead to an indefinite period of being on the lamb.