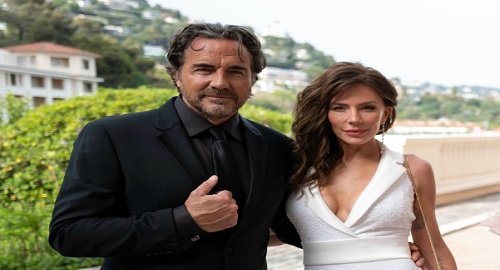 For starters, Ridge will be more conflicted than ever now that he’s back in Brooke Forrester’s (Katherine Kelly Lang) arms. Brooke will no doubt keep talking about how wonderful it is to have Ridge home – and part of Ridge will indeed be drawn to their familiar life together.

The problem is Ridge feels a lovely sense of familiarity when he’s with Taylor, too. It’s just so easy for Taylor and Ridge to get swept up in those old feelings, which is exactly what happened when they kissed in Monaco.

While Ridge feels pulled toward both women, Steffy will head to Forrester Creations with Finn. It looks like Finn and Steffy will make the rounds so that everyone can see for themselves that the good doc’s alive and well.

Steffy is on cloud nine now that she knows Finn survived his horrible ordeal – and she has Li to thank for that. B&B fans heard Steffy express her gratitude over the phone, but she’s not going to let Li’s massive secret slide either.

Monday’s episode will kick off a confrontation between Li and Steffy, who’ll put her mother-in-law on full blast. Li knew Finn wasn’t really dead and let Steffy suffer through dreadful grief, so Steffy will want to speak her mind.

Finn may try to play peacemaker and remind Steffy of what’s important since his mom did a good thing. It’s clear that Finn wouldn’t be around without Li fighting so hard and never giving up.

Even so, that doesn’t give Li a pass for her silence. Steffy is Finn’s wife, so she’ll rip into Li for keeping her out of the loop and demand some answers.